Difference between intermediates and transition states

Can someone please explain what exactly the difference between an intermediate and a transition state is?

I understand that they are formed as part of the process in converting the reactants to products in a chemical reaction. Other than that, all I know is that usually a transition state exists very briefly (if at all) whereas an intermediate can be isolated. But why?

An intermediate is a short-lived unstable molecule in a reaction which is formed inbetween the reaction when reactants change into products.

Transition states are local energy maximums and have partial bonds. This might be one of the reasons why they cant be isolated as intermediates. 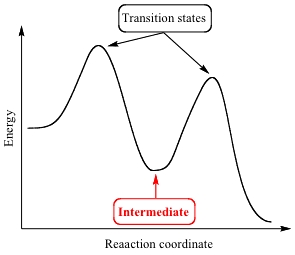 Throughout, I will be using definitions from a Journal of Chemical Education article$^1$ by Keith Laidler.

I'll start with describing an intermediate, as I think it is an easier concept to grasp. An intermediate, according to Laidler, is a short-lived compound formed during a composite reaction. This intermediate is a product of one elementary reaction and a reactant for another. An intermediate must be a minimum on the potential energy surface; this means it will have some finite lifetime (dependent on how deep this minimum is) and could potentially be isolated under the right conditions.

A transition state is a saddle point on the potential energy surface, meaning it is a maximum along the reaction coordinate and a minimum along all other coordinates (this is a slight simplification as it is possible, though rare, to have higher order saddle points where it is a maximum along more than one coordinate). Note that this definition only applies to an elementary reaction; a composite reaction doesn't have one overarching transition state. Laidler defines the broader category of transition species to refer to any structure that occurs while moving along the reaction coordinate between reactants and products. This is an important distinction; note that while a transition state is impossible to detect (it exists only for a very small range of atomic configurations and thus its concentration is always vanishingly small) transition species as whole can be detected as they exist, however fleetingly, in much higher concentration due to being defined for a wider range of atomic configurations. Laidler gives as an example the reaction $$\ce{F + Na2 ->F...Na...Na->NaF +Na^*}$$ where certain emissions surrounding the sodium D-line have been attributed to these transition species.