Is there a way to efficiently estimate the enthalpy of formation for an organic molecule in computational chemistry?

I'm exploring the platonic hydrocarbons and one of the methods I'd like to use is to compare their enthalpies of formation.

The issue is that carbon's standard form is a covalent lattice and I can't think of a way to efficiently obtain its electronic and thermal enthalpies without resorting to optimising a giant PAH.

I would say yes, you could estimate standard enthalpies of formation for molecules more or less accurately by application of quantum and statistical mechanics, although there is a 'but': the usual procedure works for gas-phase heats of formation only.

And thus, if the standard state of the material of interest corresponds to the condensed phase, you have to resort to some procedure which allows you to calculate a condensed phase heat of formation given the corresponding gas-phase one. Such procedures are based on a trivial application of the infamous Hess's law, which for the case of solids can be written as follows $$ \Delta H_{\mathrm{solid}} = \Delta H_{\mathrm{gas}} - \Delta H_{\mathrm{subl}} \, , $$ where $\Delta H_{\mathrm{subl}}$, the heat of sublimation, is estimated usually from experiementally available data on simillar compounds by a correlation scheme. However, as with any empirically fitted scheme the reliability and the accuracy of any such approach are doubtful.

If you would like to give the gas-phase heats of formations a try, I suggest running G4 calculations first. In the route section just write

and that would do it. Alternatively, in GaussView's Gaussian Calculation Setup window first choose "Energy" at the "Job Type" tab and then at the "Method" tab choose "Compound..." in the second combobox and "G4" in the third one as shown below. 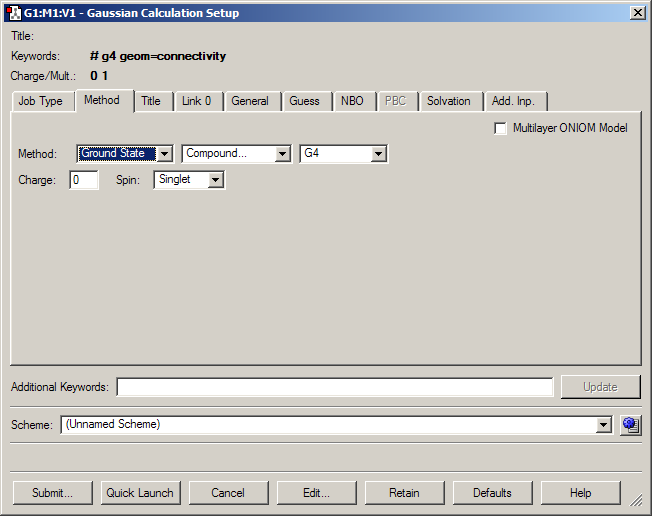 Not the answer you're looking for? Browse other questions tagged thermodynamics computational-chemistry or ask your own question.