Can any atom donate more than 1 lone pair as a coordinate bond to the same metal?

This would mean the formation of a σ and one or two π bonds, all coordinate. I haven't heard of this happening, like a fluorine anion or water with two lone pairs on oxygen will donate only one lone pair, but I wanted to know why it's not possible.

There is a class of compounds, called carbodiphosphoranes, which formally has a divalent carbon (0) central atom. Employed as a ligand it acts as a sigma and pi donor. This capability is also one of the major features to distinguish these compounds and derivatives from carbenes, which are sigma donors and pi acceptors. The following is reproduced from Thi Ai Nhung Nguyen and Gernot Frenking, Chem. Eur. J., 2012, 18, 12733-1748: 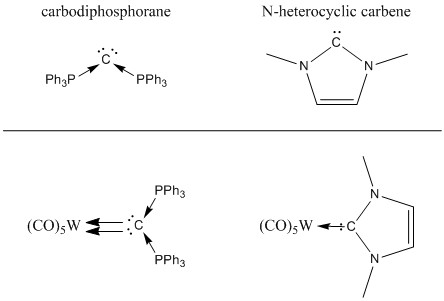 This post shall only serve as an example, I am quite certain, there are more compound with this kind of bonding motive out there. Nicolau mentioned $\ce{OsO3N^{-}}$ and other metal nitrido complexes, which he will hopefully extend in an answer.

"Water has 2 lone pairs on O, so can it donate both (one as a pi bond) just like those compounds? If not, why?"

"It is possible for pi-donating ligands, like $\ce{NH2^{-}}$ (amide anion), but not really possible for water (neutral, oxygen more electronegative)."

Pi-donation from water would lead to oxygen having +2 formal charge, thus becoming very acidic and losing proton - turning into hydroxide ligand, but I think it's the other way around; it first loses proton and then hydroxide pi-donates (becomes doubly bonded). Therefore pi-donor ligands, are often anions. Also unsaturated ligands have this property.

This is a very ubiquitous process. In most cases, the second bond will be considerable weaker than the first one, not only because of the general weakness of π bonds compared to σ bonds.

In many answers of mine, including this one, I have included the basic molecular orbital scheme of an octahedral complex surrounded only by σ type ligands. If we add π type orbitals on the ligands, they will transform as $\mathrm{t_{1g} + t_{1u} + t_{1g} + t_{2u}}$. Only the $\mathrm{t_{2g}}$ type can properly interact with the metal’s orbitals since it is the only one with fitting symmetry, and the only fitting orbitals it can interact with are the metal $\mathrm{t_{2g}}$ orbitals: $\mathrm{d}_{xy}, \mathrm{d}_{yz}$ and $\mathrm{d}_{xz}$. The improved scheme will look something like this:

Figure 1: Molecular orbital scheme of an octahedral complex with σ and π ligand-metal interactions.

Now imagine a halido ligand such as chloride in hexachloridoferrate(III) $\ce{[FeCl6]^3-}$. All of the ligand orbitals are of course fully populated, and each of iron’s 3d orbitals contains a single electron. The $\mathrm{t_{2g}}$ orbitals will contain two electrons each, the $\mathrm{t_{2g}^*}$ ones one each. This can be thought of one additional electron per orbital being donated from the ligand to the metal.

It gets more pronounced if we go to tetrahedral complexes. Consider tetrachloridotitanium(IV), often called titanium tetrachloride. Yes, it is technically closer to a molecule, but we can also consider it a very strong coordination complex. Its orbital scheme would look something like this: 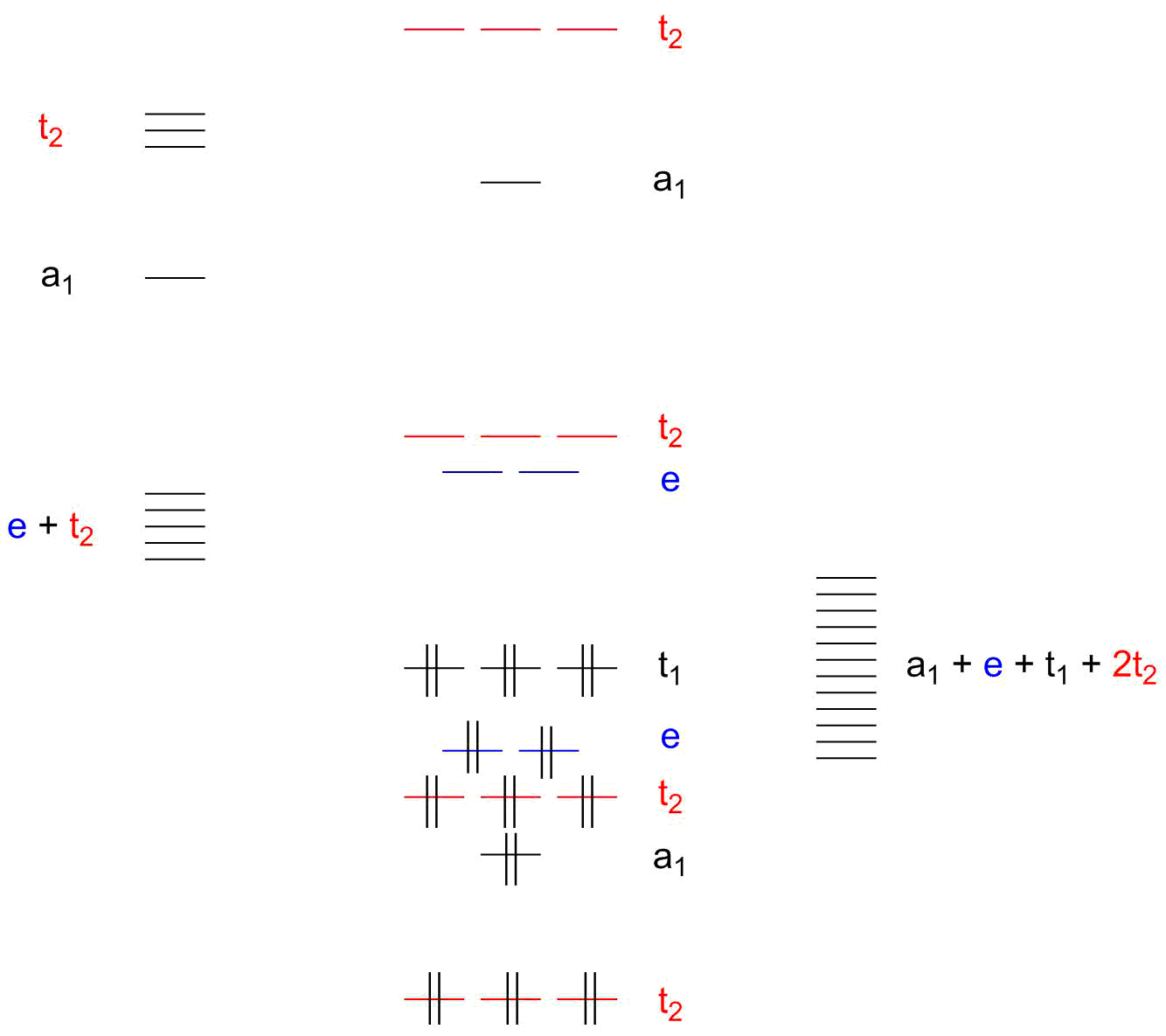 Figure 2: General molecular orbital scheme of a tetrahedral complex with σ and π type ligand-metal interaction. Originally taken from this answer of mine.

Originally, there were no electrons in titanium(IV) — the metal side — but each ligand orbital — chloride — was again fully populated. The discussion is a lot more complex since both species have two sets of $\mathrm{t_2}$ orbitals resulting in four orbitals of that kind altogether, however, we can safely say that $\mathrm{a_1}$ and one of the $\mathrm{t_2}$’s represent the σ type interactions. Thus the other $\mathrm{t_2}$ and $\mathrm{e}$ represent π type interactions — from five of the eight ligand p-orbitals with π symmetry along the $\ce{L-M}$ bond (the other three are represented by $\mathrm{t_1}$ and are nonbonding). Strictly speaking, each orbital is contributing to bonding, and also each of these interactions is a ligand-donated electron pair, so you can consider five electron pairs donated in a π manner from the four chlorides; together with the four σ electron pairs that gives you an overall bond order of $2.25$ lone pairs donated per chloride. More than one.

Finally, let’s consider the pentaaquavanadyl(IV) ion $\ce{[VO(H2O)5]^2+}$. This is an octahedral complex similar to the one in figure 1, but it’s special. First, let’s neglect the π contributions of the five water ligands altogether (they’re weak anyway). We would arrive at the most basic of all octahedral orbital schemes as in the figure in the linked answer above. You see that there are three $\mathrm{t_{2g}}$ orbitals ready for accepting π interactions from any ligand available. If we assume the oxido ligand to be sitting in positive $z$ direction, then these two are $\mathrm{d}_{xz}$ and $\mathrm{d}_{yz}$. And the oxido ligand has two ready and filled p-type orbitals orthogonal to each other that have the same perfect symmetry: $\mathrm{p}_x$ and $\mathrm{p}_y$. Each of these two can now form an interaction with the central vanadium ion, resulting in two donated π coordinate bonds in addition to the $\mathrm{d}_{z^2}^\unicode[Times]{x3c3}\mathrm{p}_z^\unicode[Times]{x3c3}$ $\ce{V-O}$ bond. The best way to represent the ion would be $\ce{{^{+}}V#O+}$ — a triple bond and a formal positive charge on oxygen. All three electron pairs of this bond are oxygen-donated coordinate bonds.

This strong triple bond also explains the extremely short vanadium—oxygen distance of less than $160~\mathrm{pm}$ (for comparison: $\ce{C-C}$ bonds are typically $154~\mathrm{pm}$, the other aqualigands have bonds lengths of c. $210~\mathrm{pm}$) and also explains why the oxido ligand does not get protonated although we are in aquaeous medium where oxides usually do not survive.

Most of the knowledge presented herein was generated by Professor Klüfers in his coordination chemistry courses at the LMU Munich.

Not the answer you're looking for? Browse other questions tagged bond coordination-compounds or ask your own question.

24
How can the intense color of potassium permanganate be explained with molecular orbital theory?
9
Colour intensity of transition metal complexes

14
Why does coordinate covalent bond form?
4
Chemical bonding and hybridization of organic compounds
2
Covalent bonds other then 2-center, 2-electron bonds
4
Are the Phosphate and Sulfate ion diagrams with double bonds an invalid picture?
3
Why is thiourea a monodentate ligand?