$\ce{-CH3}$ has a positive inductive effect but, the mesomeric effect of $\ce{-OCH3}$ should be stronger and destabilize the phenoxide ion to a greater extent

Yes, the p-methoxy group is the least stabilizing of the choices. I'm not quite sure what you mean by

so let me add a few words of explanation for the choice.

Resonance structure D illustrates the p-methyl case. Methyl is very mildly electron releasing both through resonance and inductively, so it also destabilizes the phenoxide anion, but since its effect is weak, it is not as destabilizing as the p-methoxy substituent. 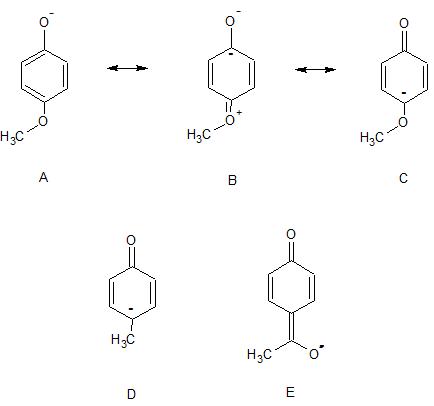 7
Why is p-methoxyphenol more acidic than p-methylphenol?
6
Does the carboxylate group show a positive or a negative inductive effect?
1
Question on organic chemistry where we are required to find enol content
9
Comparing acidity of anilinium ion and para-fluoro anilium ion
1
Basicity of nitrogen heterocyclic compounds
4
Which of the two structures is more stable?
1
Para effects on substituents in aromatic compounds
3
Stabilization of multiple bonds through inductive effects