Woody biomass is composed of cellulose, hemicellulose, and lignin components. The following diagram provides representative formulas for each component: 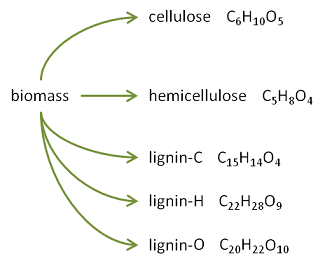 The following diagram represents a kinetic scheme for cellulose, CELL, which can be represented by the formula $\ce{C6H10O5}$:

The reaction rates for each pathway are first-order Arrhenius equations where $A$ is the pre-factor in $\mathrm{s^{-1}}$, $E$ is the activation energy in $\mathrm{kcal/kmol}$, $T$ is the temperature, and $\mathcal{R}$ is the universal gas constant:

Since the individual chemical species are represented on a mole basis, it seems like there are two approaches to solve this problem:

How do I attempt to solve this problem on a mole basis? Or is it best to treat it initially on a mass basis then convert to moles to solve for the individual chemical species?

First step is finding the molar masses of each compound. Since cellulose, hemicellulose and lignin are collections of similar molecules, I picked the following as a crude estimate:

Using a density of $700~\mathrm{g/dm^3}$ you will find the relative masses of the three compounds to be:

Keep in mind that this is a very rough estimate. You'll probably get a better result by taking the average of all species of hemicellulose, etc. in your sample and cross-checking it to make sure it fits the ratios of the elements (weight percent).

Not the answer you're looking for? Browse other questions tagged kinetics concentration elemental-analysis or ask your own question.