Why does Si2H4 readily polymerize at RTP but ethene does not (requires catalyst)?

In the case of both Silicon and Oxygen, the double bond is less stable than two single bonds. Consequently, surely both should polymerize, why don't they? What accounts for the difference between Carbon and Silicon in this context?

Why does $\ce{Si2H4}$ readily polymerize at RTP but ethene does not?

$\ce{Si2H4}$, the silicon analogue of ethylene, is referred to as disilene, a member of the silene family. 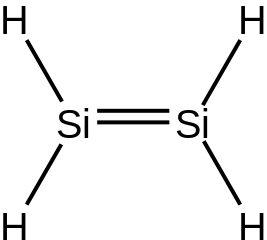 The silicon atoms in disilene are $\ce{sp^2}$ hybridized and the orbitals overlap to form both a sigma and pi bond, analogous to the hybridization and bonding in ethylene. However, the $\ce{Si=Si}$ bond length is significantly over 2 angstroms, whereas the double bond length in an ethylene is much shorter at 1.34 angstroms. This much larger double bond length in silenes results in extremely poor p-orbital overlap which yields an extremely weak silicon-silicon pi bond. While it takes energies on the order of 65-70 Kcal/mol to cause rotational cis-trans isomerization about a carbon-carbon double bond, it only takes 10-20 Kcal/mol to effect similar isomerization about the silene double bond.

Since the pi bond in a silene is so weak it doesn't require much energy to disrupt it making the molecule very reactive, much more so than an olefin. The molecule can polymerize or react with whatever else may be around such as oxygen, water, etc. 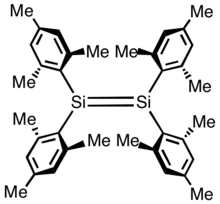 23
Why are silicon analogs of alkenes or alkynes so difficult to make?

46
Why does sulfur, but not oxygen, catenate?
5
Carbon Oxides and stability
4
Dipole Moment of Normal Water vs Heavy Water
3
Reason for shorter bond between sulphur and oxygen?
0
when Al2O3 melts which bonds are broken?
1
Why doesn't diamond conduct electricity but silicon does?