Why does sulfur form S8 instead of S3?

The ring you propose would have severe issues with ring strain, and would quickly 'pop-open' into a $\ce{S3}$ chain.

All other chains have similar benefits and penalties. The larger the ring, the greater the entropic cost for formation in a growing chain model. this is traded off with ring strain: too tight causes one kind of strian and too loose causes another.

$\ce{S8}$ is the 'sweet spot' for handling these competing factors.

As far as phosphorous goes, my understanding is that $\ce{P4}$ is the most reactive form of molecular phosphorous, and other allotropes are thermodynamically preferred.

Trisulfur does exist, but is not circular, it is ozone-like and unstable at common temperatures.

My guess is that while angle strain does exist in ring form, it is not that harsh. Unlike carbon, having natural bond angle ~109 degree, for bivalent sulfur it is closer to 90 degree (sulfur exhibits little to no hybridization). However, the S-S bond strength is only 40% of C-C bond and in trisulfur ring all S-S bonds would have dihedral angle equal to zero, which is unfavorable because of nonbonding pairs interaction. This issue is a lot more severe than in tetraphosphorus, and leads to ring opening.

For further information on sulfur allotropes see the Wikipedia article. 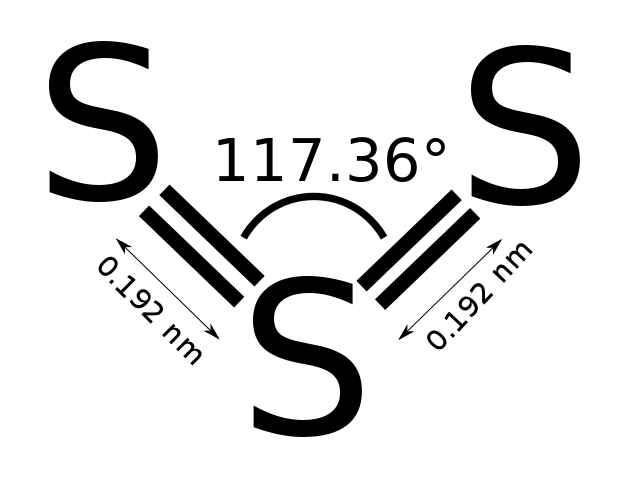 Trisulfur or thiozone is significantly present in the gas phase of sulfur at high temperature and has been studied by rotational spectroscopy as reported in The Rotational Spectrum and Geometrical Structure of Thiozone J. Am. Chem. Soc., 2004, 126 (13), pp 4096–4097

The above article states that the central sulfur is $sp^2$ hybridized.

Even though the ground state is bent, the cyclic form is only slightly higher in energy, about 5-10 kcal/mol higher.

There is evidence that the cyclic form can exist as a ligand of a transition metal complex, as reported in Transition Metal Complexes of Cyclic and Open Ozone and Thiozone J. Am. Chem. Soc., 2005, 127 (4), pp 1278–1285. According to this reference, early calculation incorrectly showed the cyclic form to be more stable for both ozone and thiozone "due to the fact that electron correlation plays an important role in these molecules, especially in the open form".

2
Why does sodium require energy to ionize?
2
Why do double bonds break
4
Are the Phosphate and Sulfate ion diagrams with double bonds an invalid picture?
2
Is it possible to figure out how many carbon-carbon double bonds are present using just the molecular formula?
6
Why does Mn (II) behave as “hard”?
8
Why can't ligands with “locked structures” undergo chelation?