A unique demo for singlet oxygen?

I have long known that mixing bleach and peroxide produces oxygen gas:

However I only recently learned that the specific form of oxygen produced by the reaction is singlet oxygen:

Is there a simple chemical demonstration that can show the difference between singlet oxygen and triplet (ground state) oxygen? Will singlet $\ce{O2}$ relight a splint "faster", or decolorize a dye faster when bubbled through solution, or otherwise be distinguishable from triplet oxygen in a home lab?

Admittedly, I'm having a professional photochemical bias when it comes to the generation of singlet oxygen!

A rather safe and simple approach - even in home experiments - is the use of air, sunlight and a sensitizer (rose bengal, methylene blue, or even chlorophyll from natural resources, such as Spirulina).

Here, the sensitizer is irradiated and excited to the first singlet state, undegoes intersystem crossing (ISC) and transfers the energy to ground state triplet oxygen, upon which singlet oxygen is formed:

A prominent reaction of $\ce{^1O2}$ is the concerted, diastereoselective addition to 1,3-dienes in Diels-Alder fashion. 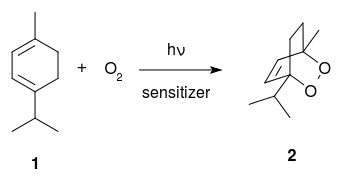 A classical example for this reaction is the synthesis of the natural peroxide ascaridole (2) from $\alpha$-terpinene (1). G. O. Schenck, the former director of the Max Planck institute for Radiation Research, performed the reaction in batteries of flasks in his garden and published the results in 1944 (Naturwissenschaften 1944, 32 (14-26), 157–157). Ascaridole is a natural anthelmintic (= against parasitic worms), hence the name.

Maybe not really suitable for home experiments due to the chromatographic workup envolved but worth to be mentioned is the Schenck ene reaction of allylic alcohols:

The reaction products can be converted to 1,2,4-trioxanes by peroxyacetalization, as shown by Griesbeck and coworkers (Beilstein J. Org. Chem. 2010, 6 (61))

Note that the 1,2,4-trioxane moiety is the key element in the natural anti-malaria drug *artemisinin. 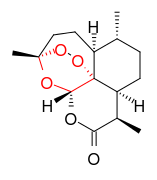 There is a great amount of relevant information in Chemistry of singlet oxygen. IV. Oxygenations with hypochlorite-hydrogen peroxide J. Am. Chem. Soc., 1968, 90 (4), 975–981.

The lifetime of the singlet oxygen in solution will be on the order of a mircosecond.

Reactions of the formed singlet oxygen with tetramethylethylene, tetraphenylcyclopentadienone and several other compounds are described.

Effects of temperature, concentration and solvent are discussed.

The lifespan of singlet oxygen in the presence of $\ce{H2O}$ is milliseconds. It reacts almost instantly to produce trioxidane (hydrogen trioxide if you prefer). Much of the reactivity of singlet oxygen is due to this molecule. $\ce{O2* + H2O \rightarrow H2O3}$. To capture active oxygen you need strictly anhydrous conditions, which you cannot obtain by mixing hydrogen peroxide with sodium hypochlorite. The best way to get singlet oxygen is to run pure oxygen through a tube coated with dye and illuminated with strong visible light. The active oxygen generated by this method can last for an hour. The best way to see it is to concentrate it which causes the molecules to collide with each other and release their excess energy as a photon of red light as they revert to triplet oxygen. There is a good pic pf this in the Wikipedia article on singlet oxygen. It shows a flask with an eerie deep red glow.

I stand corrected! I found a YouTube video that shows beautiful crimson chemoluminescence from singlet oxygen using common aqueous reagents! https://www.youtube.com/watch?v=QHJfBMDHwD4 You need hydrogen peroxide (probably 30%) a comparable sodium hydroxide solution, and chlorine gas from a gas generator. The hydrogen peroxide solutions are chilled to near freezing and added to the reaction bottle and blended together, Add the reagents to generate chlorine (I recommend inexpensive calcium hypochlorite for swimming pools and hydrochloric acid also for swimming pools) to the generator and promptly connect this to the reaction bottle and turn out the lights. You should get a conspicuous but transient red glow that will however persist until you stop pumping chlorine into it. I am guessing that the use of vhilled reagents and breaking it into a 2 part reaction gives the singlet molecules enough time to bump into each other and release their excited energy as a photon of red light. Now if only there were a simple way of proving the existence of tripxidane! $\ce{H2O3}$

Not the answer you're looking for? Browse other questions tagged home-experiment electronic-configuration photochemistry or ask your own question.

5
Is a triplet state or singlet state more stable?
1
What material is synthesized in the rubber egg demo?
5
Molecular term symbols for excited state oxygen
6
Generation of singlet oxygen by irradiation
11
Oxidation of guanine with singlet oxygen
7
Would singlet oxygen in the engine cause a more efficient combustion?
8
The electron configuration and electron density distribution in singlet oxygen
16
Why is an energy cost associated with splitting the HOMO spins in singlet oxygen?