What would follow in the series sigma, pi and delta bonds?

I realise, that this question is a stretch, but I was wondering, how would a bonding orbital be called if it was formed from two $f_{x(x^2−3y^2)}$ or $f_{y(3x^2−y^2)}$ orbitals. Have there been any suggestions on this, was it anywhere proposed or discussed? I am not arguing about the existence of such a thing, but as a thought experiment, how would it be called? Phi, $\varphi$?

I am also throwing in a reference request here, since I am interested in any literature related to the topic.

The following graphic should somewhat demonstrate what I mean: 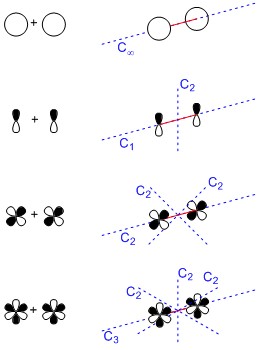 I have to admit, that I have not done much research about this. It was more like an impulsive question for me to ask.

tl;dr The next in the series is called φ bond. There is even a tiny Wikipedia article about it.

Nicolau pointed me to the Wikipedia article, that had at the time a tiny section about the φ symmetry of the bond. Ben also kindly agreed with my naming proposition. I'd like to back up just a little bit an quote one sentence of this article:

The type of interaction between atomic orbitals can be further categorized by the molecular-orbital symmetry labels σ (sigma), π (pi), δ (delta), φ (phi), γ (gamma) etc. paralleling the symmetry of the atomic orbitals s, p, d, f and g. The number of nodal planes containing the internuclear axis between the atoms concerned is zero for σ MOs, one for π, two for δ, etc.

Basically this was what I was already thinking, but since the section is quite tiny overlooked it accordingly. But since this is a reference request, I'll go a little deeper.

The concept of the bond is actually quite old and I was able to track it down to at least 1984, where Bruce E. Bursten and Geoffrey A. Ozin "demonstrate[d] for the first time the existance of φ bonds between metal atoms."[1] A little further back, 1978, N. Rösch and A. Streitwieser already performed SCF-Xα calculations on thorocene and uranocene, where they came across f orbital contributions in bonding. Yet, they did not coin the phrase φ bond.[2] Following that, there have been more theoretical studies on the diuranium molecule, with increasing level of theory.[3] One of the more recent studies is by Laura Gagliardi and Björn O. Roos, which is available free of charge (see below).[4] Xin Wu and Xin Lu also studied the phenomenon in endohedral matallofullerenes, i.e. diuranium in a Buckminster fullerene.[5]

It is quite safe to assume, that there are more studies about this research topic or in a more general aspect the research on molecules with high bond orders. For this purpose I will include a couple of good reads.[6]

Not the answer you're looking for? Browse other questions tagged bond theoretical-chemistry orbitals reference-request or ask your own question.

79
Bonding in diatomic C2, a carbon-carbon quadruple bond?
47
Are the lone pairs in water equivalent?
12
Are there any molecules with delta bonds in their ground states?
5
Do metals form covalent bonds besides ionic and cordinate bond?
5
Why is diboron (B2) paramagnetic?
10
Syntax and Typography of Atomic Orbitals
6
What comes after f-orbitals, and in what order are they filled?
3
What kind of bonds can form between benzene and transition metals in π-complexes?
2
Can d-orbitals participate in bonding?
0
Why is maximum number of covalent bonds 3?
See more linked questions

12
What is the structure of trifluoromethanesulfonic acid in the gas phase?
2
Would nodal planes of participating Atomic orbitals be nodal planes of molecular orbital?
3
According to MO theory, why is the dilithium cation more stable than the dilithium anion?
4
How to explain the excited states in the dinitrogen cation?
10
Why is the $\mathrm d_{z^2}$ orbital so different from the rest?
3
2p wave function radial distribution