How to derive partial gas equation?

If the following gasses are to mix, what is the partial pressure of neon? 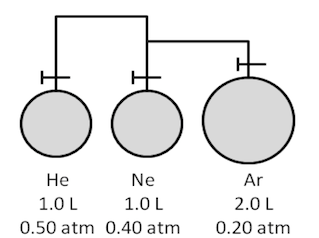 The correct answer is 0.1. I cannot figure out how my professor derived this equation. From the ideal gas law, all I can arrive to is this:

This gives me an answer of 4.4, which is obviously incorrect.

I've determined the equation he used is as follows:

which gives the correct answer of 0.1. How did he arrive to this answer?

Prepare for an amazing feat of algebra! I sincerely hope there is a shorter way to the endpoint. (there is! See the end of my answer.)

Or, as it struck me as I finished:

Helium expands to fill the total volume. Now we can use $P_1 V_1 = P_2 V_2$ and completely ignore the other gasses (there is a lot empty space for the He atoms to fit in).

This equation is very similar to your second equation, except the subscripts are added to denote initial and final pressure of helium.

The total pressure of the system is:

Can you figure out how to parcel out the individual pressures from here?

Not the answer you're looking for? Browse other questions tagged physical-chemistry gas-laws or ask your own question.

4
Where does this equation for the activity in the gas phase equilibrium between N₂, H₂ and NH₃ come from?
1
Using Cv For Non Ideal Gasses
7
High pressure modification to the van der Waals equation
3
How can we combine all the three gas laws into a single ideal gas equation?
4
How to derive the Gibbs free energy for an ideal gas?
6
Thermodynamic Derivation of Ideal Gas Law
5
Calculating Compressibility factor from the Van der Waals' Gas equation
2
How to calculate the volume or mass of carbon dioxide gas absorbed by a calcium hydroxide solution?