Green and red crystals of [Ni(Ph2EtP)2Br2]

A) coordination number and geometries of the complexes?
B) possible isomeric structures for the green and red crystals.

I know that d orbitals effect the color but I don't know how to apply it to isomers.

The coordination number of $\ce{[Ni(Ph2EtP)2Br2]}$ is four;
thus, the complex may be tetrahedral 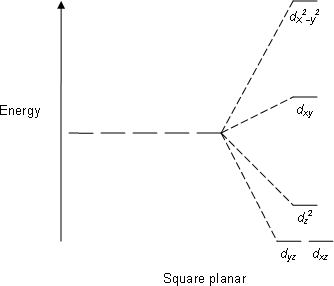 When filled with eight electrons, the tetrahedral structure is paramagnetic, and the energy difference between the highest occupied and the lowest unoccupied orbital is relatively small (4.4 Dq).

The corresponding square-planar structure is diamagnetic, and the energy difference between the highest occupied and the lowest unoccupied orbital is relatively large (10 Dq).

Furthermore, since the complex $\ce{[Ni(Ph2EtP)2Br2]}$ contains two different ligands, there are cis and trans isomers of the square-planar structure.

On the other hand, we can explain the formation of the green crystals as follows:

As for possible isomers, there are two isomers (cis and trans) for the square planar complex since it has two kinds of ligands.

7
Complexes formed by lanthanides and actinides
7
Optical isomerism in Co-ordination Compounds
5
How many different possible structures (isomers) are there for the complex, [Mn(OH2)3(NH3)3] 3+?
1
How do I find the oxidation number of a coordination complex
1
Colour changes in coordination complexes
12
What is the reason of the color difference for the cis/trans isomers of tetraamminedichloridocobalt(III) chloride?
14
Why is anhydrous copper(II) sulfate white while the pentahydrate is blue, even though both have one unpaired electron?
3
Why are different colors, according to sugar concentration observed in Benedict's test?
0
About Fe(III) and Fe(II) coordination complexes