Can metals have a net negative charge

Normal metals like sodium or Calcium have a positive charge as $\ce{Na}^+$ or $\ce{Ca}^{2+}$. Transition metals have a loot of variable oxidation states.

Yesterday I read about Iridium in Wikipedia and it stated that

which is astounding for me...

So i was thinking can metals have a net negative charged ion also? 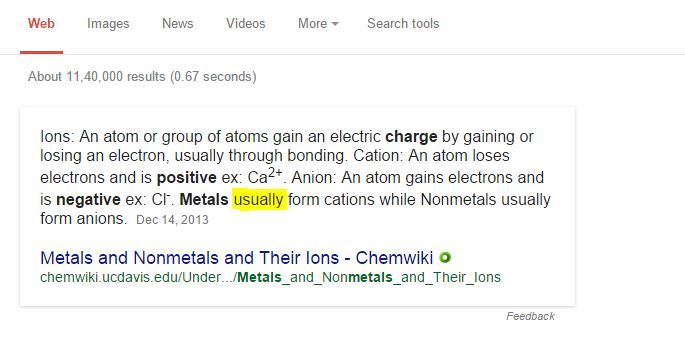 Since it is written that metals USUALLY have positive charges which means there may be conditions or compounds when they have negative charges too. Is it possible?

These species usually do not exist in nature, but they can be synthesized.

While Christian Aichinger's comment concerning $\pi$-backbonding in metal carbonyls is correct, it is important to realize that $\ce{CO}$ is a neutral ligand!

With other words: The Mond process: $\ce{Ni(s) + 4CO -> Ni(CO)4}$, using nickel powder and carbon monoxide, is not a redox reaction and the oxidation state of the metal still is $0$ in the metal carbonyl.

Not the answer you're looking for? Browse other questions tagged ions metal transition-metals formal-charge or ask your own question.

1
Negative charge of methoxide anion
3
Can we goldify metals?
1
Do only metals form ions?
1
Formal charge and net charge
0
Is it possible for a carbon atom with a negative formal charge to have ONE bond and ONE lone pair?
8
Is ruthenium really invulnerable to aqua regia?
0
Why does cobalt have no negative charge?