What forces hold ink on paper?

On regular paper, ink is absorbed, while on photopaper ink stays at the surface and dries for a longer time. What forces act in these two different cases?

What is holding ink on paper?

Why do some inks take longer to dry?

Ink sticks to paper because it has a high affinity for the medium it's being applied to. To group things into simple categories we could say, there are hydrophobic inks (non-polar inks that don't like water) and hydrophilic inks (polar inks that do like water). As with the inks, surfaces can also fall into this category. When ink is thrown onto a surface that it doesn't like, it aggregates, clumping together to avoid all interaction with the surface.

A simple illustration showing why this is unfavorable can be seen with water interacting with lipids. In the picture below, water is forming ordered cages around the hydrophobic part. These cages cause a decrease in entropy, and by the 2nd law of thermodynamics, this is unfavorable. You can think of the ink as the water, and the hydrocarbon chain of the lipid as the surface. 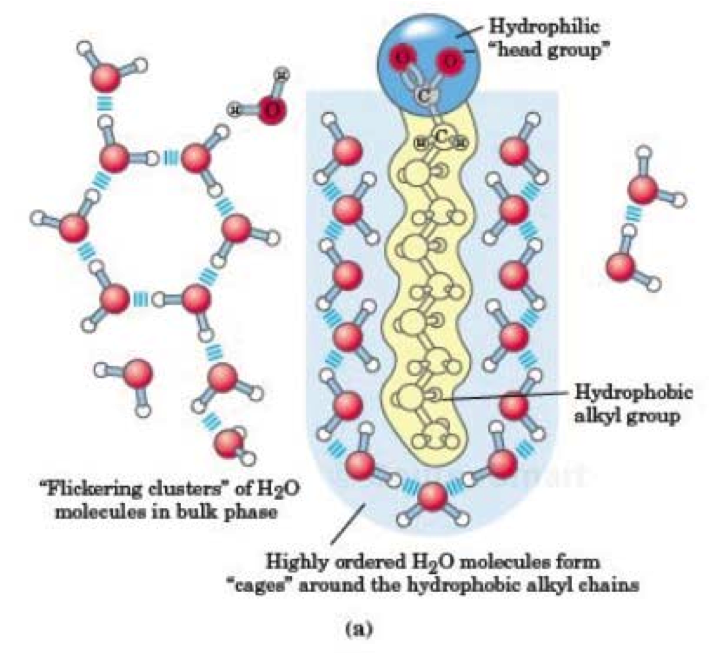 When inks do favor their substrate (surface) they will attach via h-bonding, london dispersion forces, and/or other inter-molecular forces.

As for the second question, the answer relies more on what the ink is made out of. According to the wiki on inks:

Generally, the ink, which has become mobile in its solvent, will remain mobile until the solvent evaporates. So you'll find that the dry time is dependent upon the rate of evaporation. That's why the dry times can be longer for some oil-based pens.

Not the answer you're looking for? Browse other questions tagged everyday-chemistry intermolecular-forces surface-chemistry or ask your own question.

4
How are pencil marks "adhered" to the paper?
0
Can you write (with and ink pen) on hydrophobic paper?
1
How to choose a colorant for a given substrate?

3
What is the chemical structure of the cocoate ion vs. the olivate ion?
4
How are pencil marks "adhered" to the paper?
6
Why are C6 dispersion forces named C6?
6
What structural property creates stickiness?
15
Are modern newspaper inks a health risk?
0
Van der Waals interaction and magnetic dipole dipole interaction
3
Surface energy for different crystallographic planes