Why is 2-methylpropene less in energy than its alkene counterparts?

Other isomers include 1-butene, cis 2-butene, and trans 2-butene. Why would 2-methylpropene be less in energy if there is more steric hindrance?

There are two things we need to understand before we can answer the question.

A "shorthand" way to illustrate this electron flow is by drawing hyperconjugated resonance structures like the following.

Now we can return to your question and try to understand why 2-methylpropene is more stable than trans-2-butene. Carbon-hydrogen hyperconjugation is at the center of the answer. Let's compare some of the hyperconjugated resonance structures that can be drawn for these two molecules.

Finally, we note that cis-2-butene is less stable that trans-2-butene for steric reasons. This allows us to place these $\ce{C_4}$ isomers in the following order of stability: 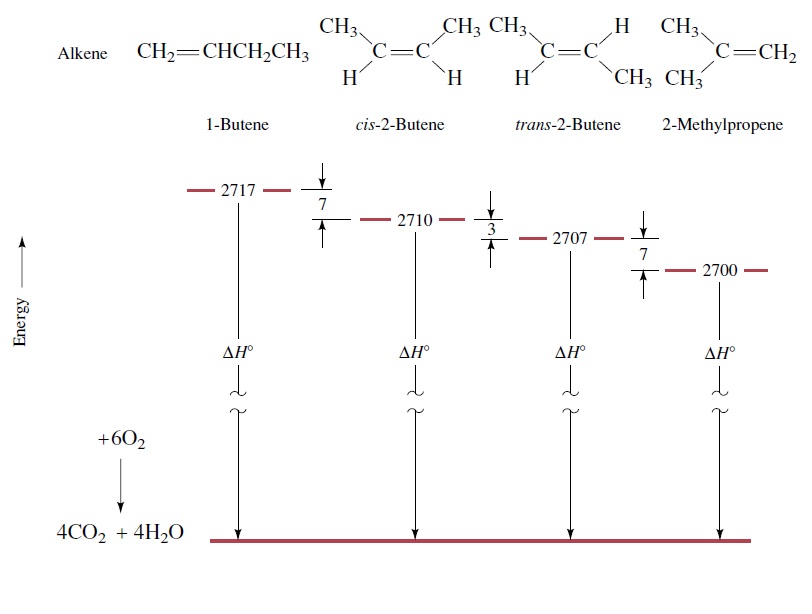 Not the answer you're looking for? Browse other questions tagged organic-chemistry stability isomers or ask your own question.

1
How to compare stability of following two alkenes
0
How would we arrange these in the increasing order of stability?
1
Stability comparison of 2-methylpropene and trans-but-2-ene
10
Why is the less substituted alkene favoured in Hofmann elimination?
10
Why is isobutane more thermodynamically stable than n-butane?
6
Stability of dialkyl substituted alkenes
6
Comparing heat of hydrogenation per mole of butenes and 1,3-butadiene
1
Need of hyperconjugation?
0
Reactivity order in hydrogenation reaction of but-2-yne and butene isomers

7
Why unsaturated fats are usually cis?
4
Which has higher rate of hydrogenation - methyl propene or trans-2-butene?
21
Are geminal disubstituted alkenes more stable than their cis/trans isomers?
31
Relative stability of cis and trans cycloalkenes
2
Melting point and boiling point in isomers
2
What type of isomers are cis-but-2-ene and 2-methylpropene?
1
Which isomers (cis or trans) are more water soluble?
0
Reactivity order in hydrogenation reaction of but-2-yne and butene isomers