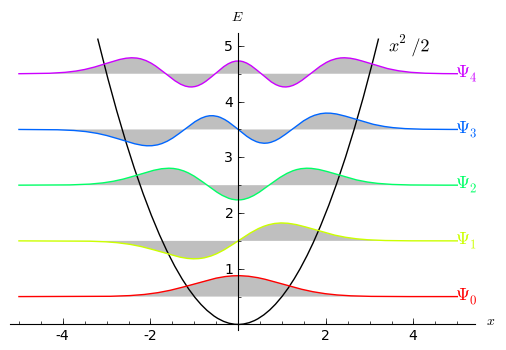 Graphs such as the above keep coming up when talking about harmonic oscillators in a quantum mechanical sense. However, I simply cannot make sense of them. What does each line represent why are they waves and what is the parabola? Also, I see sometimes graphs such as:

These seem to follow on from the initial graph. It's something to do with the recovery of classical behavior but I don't understand the first graph so stand no chance of getting the second ones at high n - perhaps you could explain the relation between the first and second graph please? Thanks

Let's start by considering the case of 2 hydrogen atoms separated by a large distance. If they happen to be on a trajectory that brings them closer together they can interact with one another. If they get close enough together they can form a bond and create a hydrogen molecule. This process is pictured in the following graph.

This "potential well" is often referred to as a "Morse potential". Out on the right edge of the curve (say 5 angstroms), we have our 2 separated hydrogen atoms. As the distance between them lessens, stabilization occurs, they can fall into the well and form a hydrogen molecule.

The classical view of the hydrogen atom is two weights connected by a spring. The more energy in the system, the wider the oscillation of the spring. With lower energy the oscillations are smaller. The energy of the spring system (y-axis) as a function of separation (x-axis) is given by Hooke's Law as

While we have used hydrogen as our model in the above explanation, the same reasoning applies to any bond formation (and subsequently bond stretch) process. For example, we could describe a $\ce{C-H}$ bond stretch in a completely analogous manner.

What does each line represent

Different vibrational levels, as explained above

why are they waves

what is the parabola?

Explained in the background section