When hypochlorous acid is dissolved in water, is it the chlorine atom or the oxygen that serves as the anti microbial agent?

The chemical disinfection (inactivation of bacteria) in fresh water can occur through a number of mechanisms, including oxidation of cell walls, inactivation of key enzymes and disruption of nucleic acids, thereby rendering them non-functional. The precise mechanism of inactivation depends upon the nature of micro-organism (bacteria, spores, viruses).

When chlorine was first used as a disinfectant in the USA in 1908 (slightly earlier in Europe), its germicidal power was commonly attributed to the liberation of 'nascent oxygen' from hypochlorous acid $(HOCl)$.

Subsequent investigations (Chang, 1944, Green and Stumpf, 1946) debunked this theory and showed that chlorine reacts irreversibly with the enzymatic system of bacteria, thereby killing it.

Chang demonstrated by showing that hydrogen peroxide or potassium permanganate which release considerable amounts of nascent oxygen, nevertheless exhibit only weak germicidal activity. Chang was able to demonstrate that there is no liberation of oxygen involved in the inactivation of bacteria by chlorine.

In any case, oxygen gas $(O_{2})$ is a much weaker oxidizing agent than hypochlorous acid, as shown in the table below. Hypochlorous acid is likely to be effective as both an oxidizing agent as well as direct chlorination of the protoplasm and reaction with lipoproteins to form toxic chloro compounts that interfere with cell division (Chang, 1944). 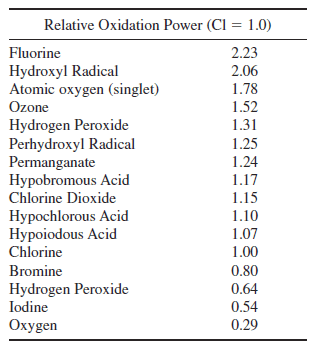 Because hypochlorous acid $(HOCl)$ is uncharged, it is better able to penetrate cell walls than other chlorine species and is about 80 times more effective than hypochlorite $(OCl^{-})$ at chlorination disinfection. 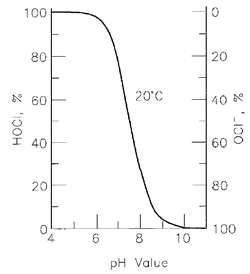 Disinfection by redox reaction using ozone gas $(O_{3})$ (a fast and powerful oxisizing agent) is sometimes used as an alternative to chlorination to reduces or eliminate the toxicity caused by residual chlorine, especially where there is concern over organic matter in the water which may produce trichloromethanes.

Not the answer you're looking for? Browse other questions tagged aqueous-solution or ask your own question.

1
Removing HCl from water
0
chlorine formed in hydrochloric acid
2
How is the dissolution of acetic acid that makes its aqueous solution a poor electrolyte?
6
Why does CO2 lowers the pH of water below 7?
4
Why isn't the hydroxyl group of citric acid deprotonated while the carboxyl groups are?
1
What is happening to my chlorine dioxide when I add too much bleach or citric acid?
2
What happens when ferric chloride is dissolved in water?