Is there a general / simple formula for Slater's rules?

I just learned how Slater's rules work on Wikipedia. These rules really are very simple. But the presentation of the rules seemed not very efficient. I would think there would be someway to set up and equation of some sort such that all you have to do is plug in the relevant quantum numbers and the element number and use some sort of formula to just compute Slater's rules more easily.

Is there such an equation / formula? If so, I'd like to see it. It would be more convenient than memorizing the rules in verbal form.

Slater wanted to use these for quantum calculations, such that the radial wavefunction would be something like:

So the rules he devised were fairly simple and produced fairly accurate predictions of things like the electron configurations of transition metals and ionization potentials. 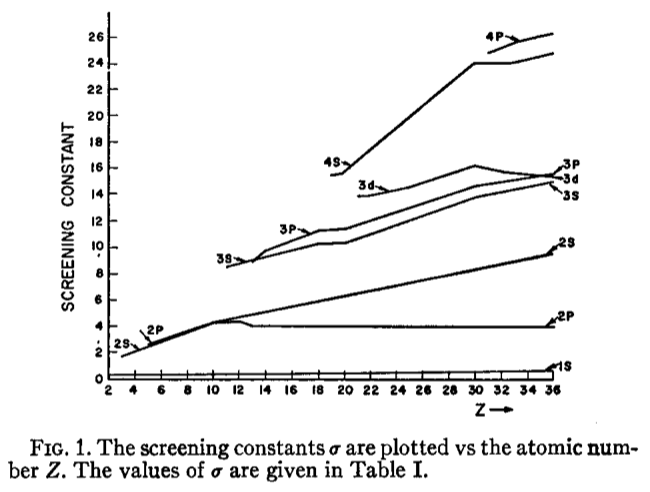 It's pretty obvious that no simple formula will cover these curves.

These days, basis set optimization is done by computer, and I doubt many people even glance at the exponents.

In my mind, Slater's rules serve two main purposes at this point:

I still teach them, particularly, for the first reason. To a lesser degree, they also reinforce the idea of effective nuclear charge and provide some semi-quantitive basis for that concept.

34
Pauli exclusion principle and resonance
18
Have there been no advances in the determination of effective nuclear charges since Clementi and Raimondi in the 60s?
13
The "rules" for LCAOs in Molecular Orbital Theory
8
Tunneling corrections in reaction rates
2
High errors in frontier orbital energy calculation using DFT