the chemical mechanism for deviations from Raoult's law

Isn't an acetone-ethanol hydrogen bond stronger than an acetone-acetone hydrogen bond? If the reason for the positive deviation of the ethanol/acetone solution is that the H bonds there are weaker than ethanol-ethanol H bonds, then there wouldn't that imply that acetone/water solutions would also have a positive deviation, as water-water H bonds must be much stronger than water-acetone, right?

So is there some other explanation?

First some general comments about Raoults law before discussing the particular solutions in question.

Raoult’s law suggests that the partial pressure of each substance above a solution is proportional to its mole fraction x, thus $p=p^ox$ where $p^o$ is the vapour pressure of the pure substance.

The reason for these deviations is due to the different interaction between the molecules. The change in interaction on adding one liquid to another is due to the difference in interaction energies between them, thus if the energies between the same type of molecules of type 1 and 2 is $E_{11}$ and $E_{22}$ (which can be positive or negative) we can write the difference in energy as $$ \Delta E = c(E_{12} - E_{11}/2 - E_{22}/2)$$ where c is a constant to account or the fact that molecule of type 1 and 2 are different. A positive value of $\Delta E$ indicates that the interaction between types 1 and 2 is less attractive than either molecule to itself and a negative value that types 1 and types 2 will prefer to interact with the other type of molecules than themselves.

All atoms have dispersion interaction (induced dipole-induced-dipole) due to their polarisability, and in addition may have permanent dipoles, (causing dipole-dipole and induced-dipole energies) and hydrogen bond interactions. Clearly which contribute depends on the particular case being studied.

where $\Delta E^o = \Delta E/kT$ where k is Boltzmann’s constant and T temperature. This function is shown in the figure for different values of $\Delta E^o$. When this is positive there is a positive deviation from Raoult’s law, a $\Delta E^o = 1$ approximately describes the ethanol/ water data and $\Delta E^o = -0.5$ the acetone/chloroform data. (The maximum $\Delta E^o = 2$ since above this phase separation occurs) 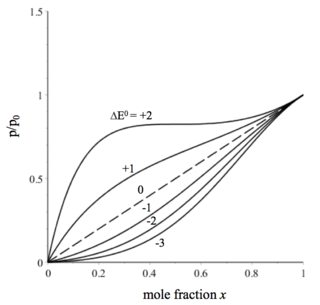 Now for the particular solutions mentioned, ethanol-acetone has a positive deviation and thus $\Delta E^o > 0$. It is not really possible without some (spectroscopic) experimental data to say what interaction causes this; most likely it is slight changes of each type of interaction, but probably mainly changes in dipole-dipole and hydrogen bonding. The data indicates that acetone-ethanol interactions are less favourable than either molecule with itself.

In the acetone - water data the interaction between these two types of molecules is more favourable in such a way as to overcome the sum of water-water and acetone-acetone interaction energies. This is somewhat unusual for water as it is a highly associated (i.e. hydrogen bonded) liquid and a second component tends to break up this association.

We must conclude, however, that the acetone is able to become solvated in such a way as to disrupt the water structure but still be of lower energy than the sum of water-water and acetone-acetone interactions. Again only spectroscopic evidence will indicate what the interactions are; without this we can only speculate but it could be that the main gain comes from removing acetone-acetone interactions and replacing them by water-acetone even though the water-water interaction is favourable, losing some of this interaction must be compensated for by gaining acetone-water ones.

Not the answer you're looking for? Browse other questions tagged solutions vapor-pressure or ask your own question.

4
Deviation from Raoult's law because of adhesive and cohesive forces