When do lone pairs on nitrogen contribute to aromaticity?

I've been told that 1,2,4-trimethyl-1⁠H-imidazole is aromatic. As it has four obvious pi electrons (in the double bonds), I assumed that it was anti-aromatic as opposed to aromatic.

Both nitrogens in your drawing are roughly $\mathrm{sp^2}$ hybridized, therefore they each have a p-orbital and 3 $\mathrm{sp^2}$ hybdridized orbitals. All of the p-orbitals, including those on the 3 carbon atoms in the double bonds, are perpendicular to the plane of the screen (e.g. they project above and below the plane of the screen). So there are 5 p-orbitals and each contains one electron except for the one p-orbital located on your "bottom" nitrogen (in green). This p-orbital contains the nitrogen lone pair, so there are two electrons in this p-orbital.

Let's take a closer look at the "top" nitrogen in your drawing (in purple). Where is its lone pair? It resides in an $\mathrm{sp^2}$ orbital on this nitrogen. The $\mathrm{sp^2}$ orbital lies in the plane of the screen. This orbital is orthogonal (perpendicular) to the 5 p-orbitals; therefore these 2 lone pair electrons are separated from the electrons that make the molecule aromatic. They are not involved in the molecule's aromaticity.

Here's how to approach this situation in the future:

The nitrogen with a methyl group does indeed contribute to aromaticity in this molecule. The criteria for aromaticity under Hückel's rule are that $4n+2$ electrons reside in coplanar p-orbitals in a cyclic system. This allows the p-orbitals to overlap and form a set of π-orbitals, which are delocalised over the whole ring system.

In this example all the atoms in the ring are sp2 hybridised. The three carbons in the ring form three σ bonds with their sp2 orbitals and then have one half-filled p-orbital perpendicular to the plane of the ring which participates in π-bonding.

The nitrogen with a double bond forms two σ bonds with two of its sp2 orbitals and uses the third to accommodate its lone pair. The lone pair is therefore in the plane of the ring, facing outwards, and is thus unable to participate in π-bonding. It is left with a half-filled p-orbital in the plane which contributes another electron to the π-system.

The nitrogen with the methyl group attached forms three σ bonds with its sp2 orbitals, and therefore has a full p-orbital remaining perpendicular to the plane of the ring, which can overlap with the other p-orbitals to form a π-system.

In total there are six π-electrons residing in five coplanar p-orbitals. So, Hückel's rule is fulfilled and aromaticity is present.

Note that on top, delocalizing the electrons from that particular nitrogen results in a resonance contributor that has an $\ce{sp}$ hybridized nitrogen. $\ce{sp}$ hybridization implies a linear bond angle (180 degrees). Do you think we can get anywhere close to a linear bond angle in a 5-membered ring of all things? Remember, in resonance contributors the nuclei don't move. It's just the electrons that are "moving" (delocalized).

In the bottom I try to delocalize the electrons from the other nitrogen. This is fine, as the resulting resonance contributor now has an $\ce{sp^2}$ nitrogen. Note that this does not mean that the nitrogen in the ring is exactly $\ce{sp^2}$. It's likely somewhere in between $\ce{sp^3}$ and $\ce{sp^2}$. A more or less $\ce{sp^2}$ atom in a 5-membered ring is more plausible than a $\ce{sp}$ atom. So we can conclude that it's this nitrogen's lone pairs that are delocalized throughout the ring. Incidentally, this makes for 6 pi electrons. Additionally, the other Huckel rules are fulfilled (even the planar requirement; both nitrogens have $\ce{sp^2}$ character so they're more or less planar). So we can conclude this molecule is aromatic. 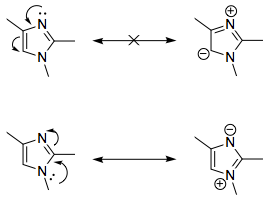 Not the answer you're looking for? Browse other questions tagged organic-chemistry heterocyclic-compounds aromaticity or ask your own question.

5
Do lone pairs contribute towards the pi electron count of heterocycles?
8
Why is the thione tautomeric form of 2-Mercaptopyridine favoured?
7
Which rings of this heterocyclic compound are aromatic?
25
How does the cyclopropyl group influence conjugation and aromaticity?
27
The order of aromaticity of benzene, thiophene, pyrrole, furan, and pyridine