Which is More Stable with Boranes: Amines or Phosphines?

Given borane's ($\ce{BH3}$) LUMO, which of these Lewis bases would have a more stabilizing interaction? In acid bases that means the higher HOMO and lower LUMO equals a stronger dative bond I believe.

So which would have a stronger interaction (greater net stabilization) with borane, trimethylphosphine or trimethylamine:

Phosphorus is less EN and it's electrons reside in a higher energy 3p orbital, but doesn't it compensate for this by placing the electron pair an orbital with more "s" character? Also carbon is more EN than phosphorous drawing some strain.

I would say trimethylphosphine has the HOMO just because of it's higher orbitals and lower overall EN making donating a pair of electrons more favorable.

OK, first off, let's comment on the stability question. When making a Lewis adduct (and rationalizing with the frontier orbital approach), you want the resulting complex to be stable. That requires two possibilities: 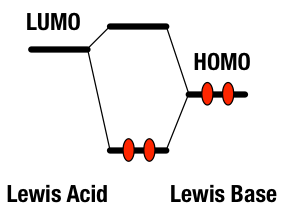 I want those electrons to be stabilized. Either (or both) approaches can work. So to correct your statement, you don't want a "high HOMO" or "low LUMO."

The catch, of course, is that a large splitting between the Lewis acid LUMO and Lewis base HOMO can lead to low coupling (poor orbital overlap).

This would suggest that the phosphine would form a stronger bond with a borane.

The complexation energies of $\ce{H3BXH_{$3−n$}F_{$n$}}~(\ce{X~$=$~N, P}; n=0–3)$ and the proton affinities of $\ce{XH_{$3–n$}F_{$n$}}$ compounds have been investigated at the G2(MP2) level of theory. The G2(MP2) results show that the phosphine complexes are more stable than the corresponding ammonia ones. ... The NBO partitioning scheme shows that the stability of the phosphine complexes was related to the hyperconjugation effect.

Basically, the phosphine complexes seem more stable because there is some back-donation of electrons from the borane into the phosphine. It's not just a simple frontier orbital picture - more orbital interactions come into play.

11
IS DMSO-o a σ-donor, a π-donor, or both?
3
Why does strong Lewis acid-strong Lewis base interactions prevail over hard-soft acid-base interactions?
9
How does conjugation affect reactivity?
3
The molecular orbitals of lithium hydride
4
The intrinsic electron-withdrawing nature of alkyl groups
4
When is donation into an anti-bonding MO stabilising?
2
Molecular Orbital Hybridization vs Delocalization for positive charge stabilization
1
Adding cyanide vs nitrite for nucleophilic substitution and why does it change when we use silver salts for it