Why does the "gap" between atomic radii get smaller down the periodic table?

The first thing to remember is that the "shell" model is an over-simplification of quantum chemistry. A better picture is that the electrons represent "clouds" (i.e., electron density).

Your question basically boils down to "why don't 5th and 6th row atoms get much larger?"

It's pretty obvious that as n gets large for s orbitals (l=0), that formula approximates:

(The left side becomes smaller and smaller, so the coefficient gets closer and closer to 3/2.)

So for a hydrogen atom (one electron), the 5s and 6s orbitals in fact get very large.

Your question is about atoms. So we have to consider many electrons. Basically, this is another representation of the lanthanide contraction caused by relativistic effects.

Indeed, in that last link, there's a formula for the atomic radius after relativistic corrections. 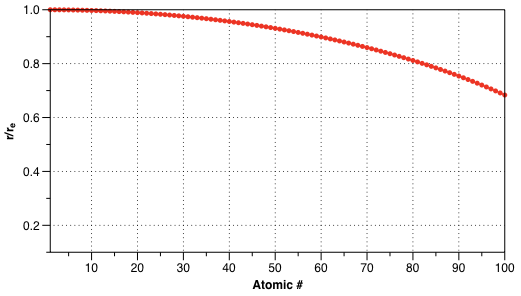 14
How fast do electrons move around the nucleus?
8
Relativistic effects and lanthanide contraction
4
Why is the difference between atomic radii of Na and K greater than that of Rb and Cs?