Does anyone know if this is correct? I don't have the solution for these in my book :S

There is a trend that follows an arrow from the lower left of the periodic table to the upper right. As the atomic number increases along a period, the radius for each element decreases. Here is a useful image of this: 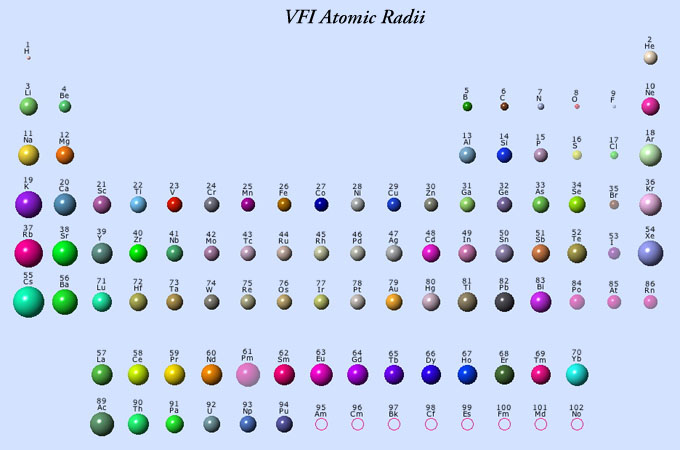 Notice that, with the exception of the noble gases, you can draw an arrow from the lower left to the upper right. The justification for what you see here is that as the principal quantum number increases, the probability that the electrons are more distance from the center of the atom also increases. The higher the principal quantum number, the higher the energy of the electron and therefore its probable distance from the center of the atom. Therefore, as you move down a group, the radius increases.

However, another factor is that as the number of protons increase in an atom, so does the positive charge which happens to pull the electrons toward the center of the atom. So, there is the impact of the protons causing a decrease in radius (probability of the electron being closer to the center) and the probability that the electrons are in an orbital that is farther from the center.

The transition metals, however, have d orbital electrons. These electrons enter into a shell that is closer to the nucleus and the change is less noticeable. That is part of the reason why they do not seem to change as much as the other atoms, according to my understanding.

Not the answer you're looking for? Browse other questions tagged homework atoms electron-affinity or ask your own question.

1
How to arrange substances in order of increasing vapor pressure?
7
Why aren't atomic radii calculated using Schrödinger's equation?
2
Finding orbit radius using the Bohr model and Rydberg equation
2
How do I figure out the relative polarity of organic compounds?
6
Interaction radius of a molecule
0
Find molar concentration of sodium carbonate dissolved in water
0
Bohr Radius Confusion
0
How to compare size of subshells?