How to rationalise the difference in the melting points of acids and alcohols with inter molecular forces?

The melting points of acids with $\ce{-COOH}$ at the end compared to melting points of alcohols, $\ce{-OH}$ at the end, is higher. I need to relate this to intermolecular forces. I was going to say that because of many more electrons in the acids, there are greater London dispersion forces and also more polarity (dipole dipole forces) because of the $\ce{COOH}$ at one end. Is this correct?

The ultimate goal of melting-point reasoning is to explain how intermolecular forces lead to better packing of molecules in the solid phase.
Both alcohols and organic acids have hydrogen bonds, but organic acids have stronger hydrogen bonds due to the withdrawing carbonyl group, $\ce{COO-}$. This causes the acids to interact stronger with each other. More importantly, organic acids form dimers (usually) with their hydrogen bonds (acetic acid dimer, for example). For this reason, the packing of the acids in the solid phase is significantly better than that of alcohol; hence the higher melting point. Acetic acid: $16~^\circ\mathrm{C}$ vs. $-114~^\circ\mathrm{C}$ for ethanol.

Huy Nguyen has already addressed the importance of dimers through hydrogen bonds in the solid state of alkanoic acids.

If you want to correlate the chain length of alkanoic acids of the form $\mathrm{{C_{n}H_{{2n+1}}-COOH}}$ with their melting points, a look at the data might be helpful:

Plotting melting points vs length of the alkyl substituent gives the following result: 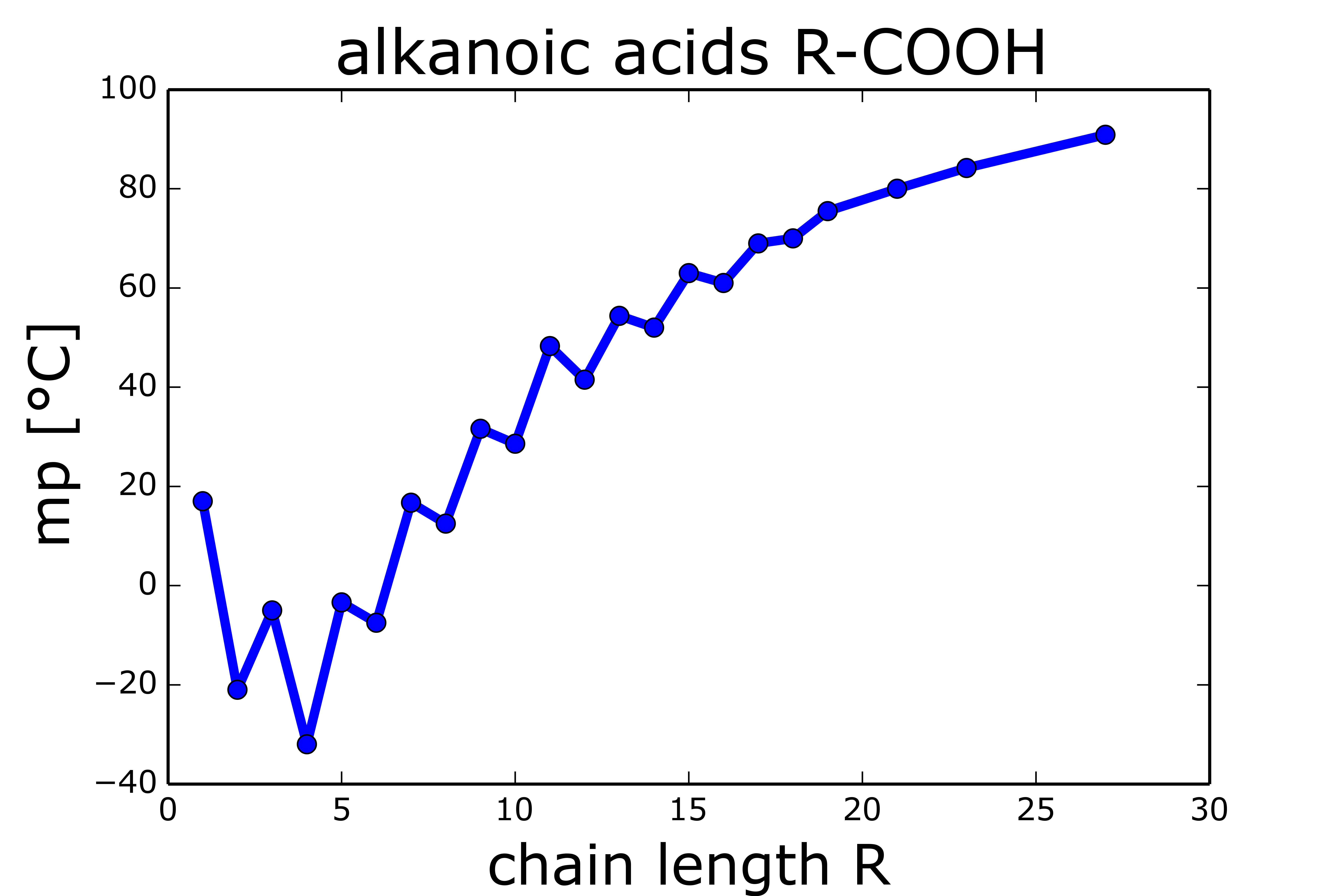 Not the answer you're looking for? Browse other questions tagged intermolecular-forces melting-point alcohols or ask your own question.

3
Why is the boiling point of CH3COOH higher than that of C2H5OH?

14
Why does silicon tetrafluoride have a higher melting point than sulfur tetrafluoride?
0
What other intermoelcular forces can exist between neutral molecules?
3
Why does chlorine have a higher boiling point than hydrogen chloride?
1
Forces of attraction of hydrated potassium ion in aqueous solution
16
Why is the melting point of PCl3 less than that of PCl5?
6
Why are the dispersion forces in CS2 stronger than the dipole-dipole forces in COS?
0
Which has a lower boiling point, Ozone or CO2? Why?
1
Melting points of benzoic and stearic acids