But when I check to make sure it was right, I came across a source saying

Can someone clarify which one it is so I can understand.

You can look up the molecule on chemspider, where you have a little applet for the 3D structure. Or you can download a coordinate file from NIST and view it in a molecular viewer, like Avogadro. Or keep on reading for some deeper insight.

As Klaus already pointed out, if VSEPR is a valid concept, one would arrive at the conclusion, that the molecule is trigonal pyramidal, like ammonia. I performed a DF-BP86/def2-SVP calculation on this to analyse the electronic structure a bit more. 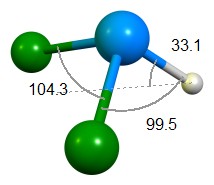 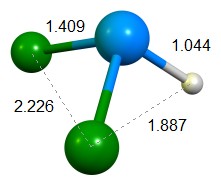 The planar (trigonal) structure on this level of theory is about 33 kcal/mol higher in energy. It is the transition state for the nitrogen inversion, which is therefore very slow.

Not the answer you're looking for? Browse other questions tagged lewis-structure vsepr-theory molecular-structure or ask your own question.

14
Utility of Bent's Rule - What can Bent's rule explain that other qualitative considerations cannot?

7
Shape and polarity of the iodate ion
3
How can I determine the structure of complexes with ethylenediamine as a ligand?
13
Are carbocations necessarily sp2 hybridized and trigonal planar?
2
Comparing bond angles in carbonyl dichloride and carbonyl dibromide