How to Determine the Rate Law knowing time and concentrations

Consider the hypothetical reaction described by the following equation:

Reagent B was added in excess and the following time concentration data was obtained.

(i) Derive the relevant integrated rate law and hence find the rate constant.

I am thinking that to solve this question you just sub the values into the integrate rate laws and see if it produces a linear relationship.

Is this correct? Also could you please suggest a faster method of solving this type of question.

You could plot the data to determine the order of the reaction. I would use Microsoft Excel to do this. Reproduce the data and then add columns that calculate the $\ln [A]$ and $\frac{1}{[A]}$. Then plot $[A]$, $\ln [A]$ ,and $\frac{1}{[A]}$ vs. time (I would use separate plots). The plot that gives the "best" linear fit (which you can assess using the $R^2$ value), corresponds to the appropriate integrated rate law.

In addition to Tami M.'s answer:

You might want to give Python, the IPython Notebook and matplotlib a try: 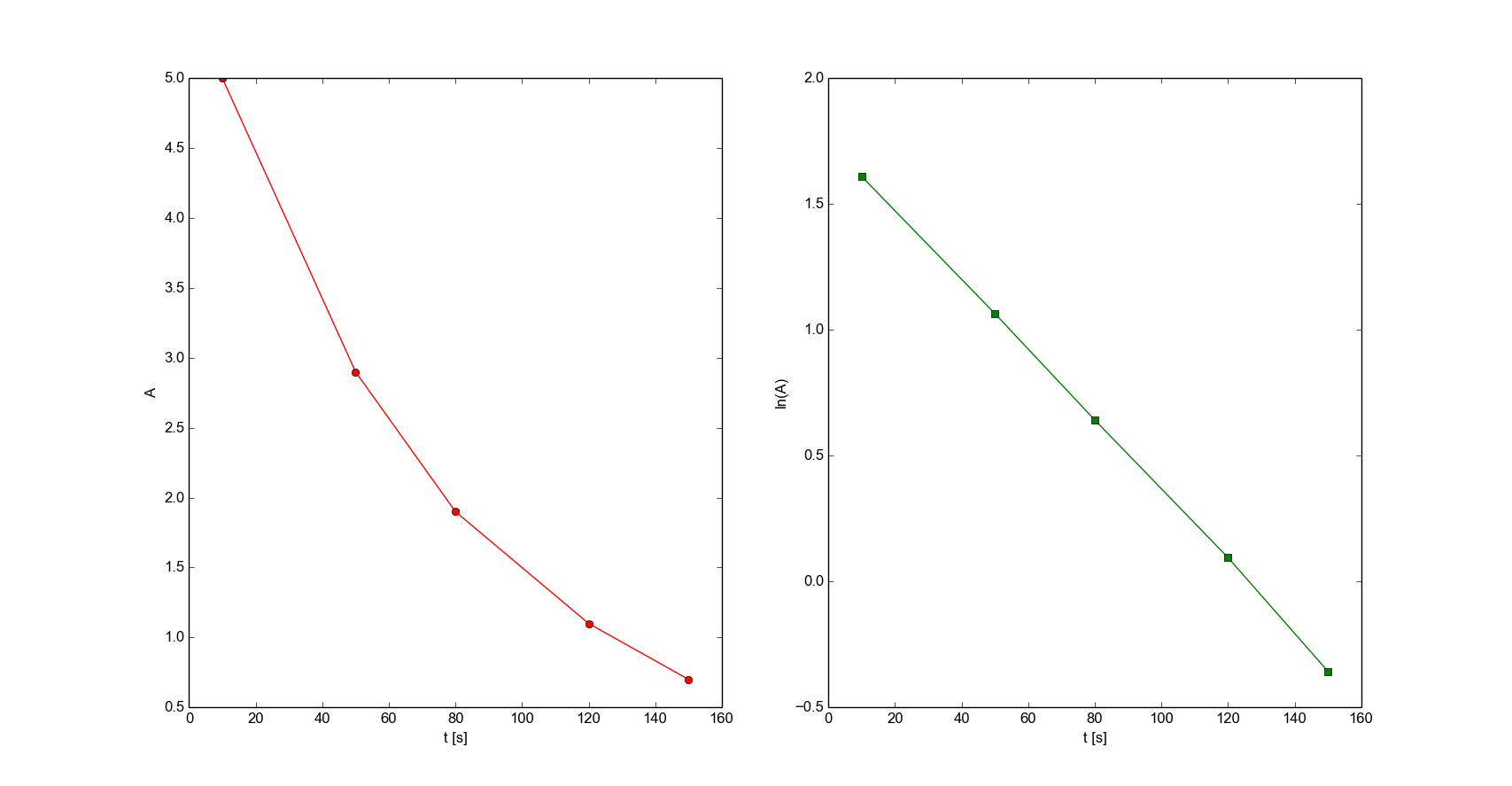 Note that the plots are not fine-tuned and that I omitted a further fitting ;-)

The regression model for the ordinary least-square case is:

with a design Matrix X:

where each point x is appropriately transformed depending on the presumed rate order.

The Variance-Covariance Matrix, which is central to assessing the precision of the rate order estimate, is created by taking the matrix inverse of [ matrix product of [transpose of Matrix X] times [Matrix X]]]. It is further scaled by an estimate of the variance of the regression model fit (computed from the differences between fitted and reported for each point which is further squared, summed for all points, and divided by (n-2). See Wikipedia discussion of statistical theory at https://en.wikipedia.org/wiki/Ordinary_least_squares.

Then, one could apply a hypothesis testing procedure (like the t-test) as to whether the slope is o or 1 or 2. However, this is not precisely correct, and one should examine other data or theory (like looking at the expected slow rate-determining step coefficients), and then proceed to selected just one value from (0, 1, 2) for testing.

However, in the case of getting a fractional value (as a regression model of the above data actually indicates), try a direct test for linearity (see, for example, a proposed idea of modifying the regression at http://essedunet.nsd.uib.no/cms/topics/regression/4/3.html ). This consists of introducing a quadratic term in time, and if the latter fails a t-test of being different from zero, the model is deemed to have passed a linearity test.

1
Determine the order of the reaction, and the value of the rate constant. Predict the concentration of AB at 25s
0
Rate of change of reaction rate of 0th, 1st, 2nd order reaction?

1
How to calculate the rate constant of a zero order reaction?
2
Determination of the integrated rate equation for a reaction
2
Error in calculation of rate of reaction through graphs
1
Denominator in rate law?
0
For a 1st order reaction, how do you derive the integrated rate law for a product versus time?
4
Determine reaction order and reaction rate
4
Determine vmax and enzyme concentration (Michaelis–Menten)