What is the actual reason behind PCl₅ existing as an ionic solid?

The same is true in the case of $\ce{PCl_5}$. In the gas phase it exists as a covalent compound with a trigonal bipyramid structure. However, in the solid phase, it turns out that enthalpic affects favor the ionic tetrahedral/octahedral structure $\ce{[PCl4]^{+}[PCl6]^{-}}$. Simply said, the ionic structure turns out to be thermodynamically more stable in the solid phase where positive and negative charges can be arranged to stabilize the entire lattice; whereas in the gas phase the positive and negative ions cannot be stabilized so the covalent form is favored since it is now lower in energy than the ionic form.

Another reason why the ionic form is preferred in the solid phase is that packing regular geometric shapes such as tetrahedra and octahedra together allows for a more stable arrangement since they can be packed closer together and in a more ordered arrangement than non-regular (kind of an odd shape) trigonal bipyramids can be arranged.

If we generate an ion in the gas phase, it will have a certain energy associated with it. If we put that ion in a solution its energy will be much less. We say the ion has been stabilized by placing it in solution. Some solvents will stabilize the ion more than other solvents. This relates to the dielectric constant of the solvent which is a measure of the solvent's polarity. The higher the dielectric constant for a solvent, the more polar the solvent and the better its ability to stabilize and lower the energy of an ion dissolved in it.

Here is a picture showing a sodium ion dissolved in water. Note how the negative ends of the dipoles in the water (the negatively polarized oxygen end of the water molecule) molecules congregate and orient themselves around the positive ion. This orientation of the negative ends of multiple water molecules around a positive sodium ion is what stabilizes the ion in solution. There is no such stabilization in the gas phase. In the gas phase it is just a "naked" ion without any external stabilization, so in the gas phase an ion will have a higher energy.

Here is another picture showing showing (on the right) sodium chloride in a crystal lattice. The sodium and chloride ions pack around each other to perform the same function as a solvent. The opposite charges arrange themselves around each other to minimize electrostatic repulsion between like ions and maximize the stabilizing electrostatic attraction between oppositely charged ions. Through these types of arrangements, the "lattice" can stabilize ions much like a solvent can stabilize ions. Consequently, both solvents and crystal lattices stabilize ions and lower their energy compared to the ion's energy in the gas phase where no such stabilization exists. 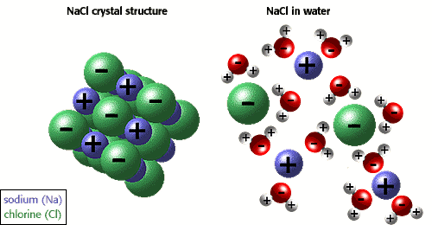 Not the answer you're looking for? Browse other questions tagged physical-chemistry inorganic-chemistry solid-state-chemistry or ask your own question.

2
What is the nature of the oxide of boron?
6
Why does the dielectric constant of a solid increase due to a Frenkel defect?
9
What is the actual mechanism of Fenton reaction?
1
What is the reason behind electron transition in the flame test
2
Why Frenkel defect does not impact the density of the solid?
2
Effect of anisotropy on electrical conductivity of crystalline solids
7
In solid-phase peptide synthesis, why are the formation of aspartimides a problem but not "glutamides"?