What is the specific structure of Poly(allylamine hydrochloride) (C3H7N)n HCl?

I'm working with Poly(allylamine hydrochloride), and I found that the chemical formula is $$\ce{(C_3 H_7 N)_{$n$}. HCl}$$ But I need a diagram like below, but more explicit. I mean with the carbons, where they are exactly? 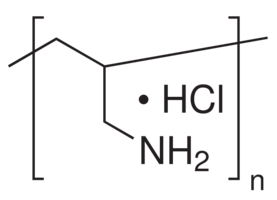 My intuition is telling me that, based on your empirical formula and the image you provided, all three carbons are at the bends in the line-notation as is conventional in bond-line notation. The structure inside the brackets is repeated virtually indefinitely, as shown with the $n$ at the bottom right of the image. I have circled the alleged carbons in the image.

This adds up if you count the number of Hydrogen atoms bonded to these carbon I believe it will add up to 7 as your formula suggests.

The structure in the link that you provided in your comment does not show us a structure of the hybridization that is, well very good to be honest. For one thing it is not a picture of the polymer, instead it is just a small molecule with a double bond, and the Hydrogen on the Carbon connected to the Nitrogen appear to be in a funky alignment, they should face away from the flat shape the Jmol applet is showing.

As for the structure in the polymer, we should be able to determine from the bond-line notation that if each carbon is $sp^3$ hybridized, then as the bends suggest we have a molecule which bends roughly 109.5° between all of the Carbon-R bonds. This can be visualized as a tetrahedral shape where the Carbon atom sits in the center of the geometric shape and the atoms that it bonds to are at the corners.

Now given that the Nitrogen atom is $sp^3$ hybridized, since it has 3 covalent bonds (and one lone pair that is left off for clarity), it should have bond angles of ~108° between itself and either of the two Hydrogen or the one Carbon atom allowing a 'trigonal pyramidal' shape. Not very easy to imagine after staring at this picture, which is why we use model kits to help us visualize the molecules. 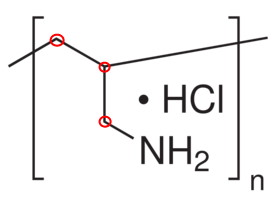 Not the answer you're looking for? Browse other questions tagged structural-formula or ask your own question.

17
What is the chemical structure / hybridization of sulfuric acid?
3
What would a diagram of the metal lattice structure of CuSO4 look like?
13
What is the structure of iodide of Millon's base?
15
Portable library to render 2D structural formulas as vector graphics from SMILES or InChI
2
How to draw Fischer projections for carbon chain having more than two carbons?
1
What is the correct structure for trans-3,4-dichlorocyclopentene?