In molecular orbital theory, why does s-p mixing in the dinitrogen molecule not effect the 1σᵤ orbital?

My lack of understanding may be as a result of the fact that I am unclear as to what exactly it is that is mixing. Clearly they are the s and p orbitals but is this within the atom or is the s orbital on one atom interacting with the p on the other? 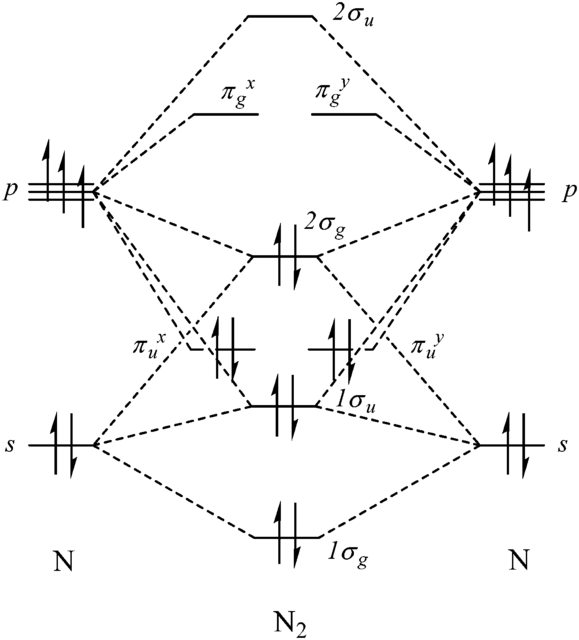 Rob, if you poke around on the internet you can find many sites that show diagrams for how the $\ce{N2}$ molecular orbitals are formed from two sets of nitrogen ($\ce{N1}$) atomic orbitals. Many of the diagrams are different one from another - that's a tip off that s-p mixing is not something that can always be predicted in advance. With that understanding, let's step through your diagram and questions.

It might be useful to take a look at the $\ce{N2}$ MO diagram here. It's just like your diagram. but they break down the steps and it might be a bit less confusing.

In any case we have a nitrogen atom with 5 valence electrons, 2 in the 2s atomic orbital and 1 each (total of 3) in the 3 degenerate p orbitals. If we move a second nitrogen atom into the vicinity, these atomic orbitals will hybridize in order to start the bond formation process.

$\ce{N2}$ is analogous to acetylene, they both have a triple bond that is made up of 1 sigma bond and 2 pi bonds. In acetylene - and nitrogen - the sigma bond is $\ce{sp}$ hybridized. We form this bond by

With that background, let's now look at your questions

Clearly they are the s and p orbitals but is this within the atom or is the s orbital on one atom interacting with the p on the other?

Hopefully I answered this above. I tried to distinguish between atomic and molecular orbitals. If I haven't been clear, post back.

Hopefully what I wrote above clarified this as well, let me know if it didn't.

I can see how Ron's answer fully addresses the effect of sp-mixing, I would just like to add a probable cause for this effect: I'm not sure about this theory, but could it have anything to do with the relative penetrations of the n(sigma bonding and antibonding) orbitals being much more than that for the higher energy n+1(sigma bonding and antibonding) orbitals? The ones in the lower energy state (n'th quantum number) being more stabilized due to its greater capacity at penetration, which leads to it being more stable (it is closer to the positive core of each atom). The decrease in the stability of the n+1 orbitals can thusly be accounted for, since the effective positive charge from the nucleus is decreased.

13
Is s-p mixing referring to hybridization or is it the mixing of one atoms s orbital with the other's p orbital?
4
Why does the ionization energy decrease anytime the atom size increases?
3
How do I determine the number and order of ligand orbitals?
3
When is donation into an anti-bonding MO stabilising?
2
Hyperconjugation and the stability of alkenes
1
Why does the d orbital size decreases on addition of electrons?
1
Tendency of formation of complexes in Group-1 elements
5
Explanation of the orbital energies resulting from Jahn-Teller distortion of octahedral complex using MO theory