How do I calculate partial pressure here?

Now the above is the case for when the fuel cell is being fed pure oxygen and pure hydrogen. I am doing a project and we are designing to feed the fuel cell ambient air which is composed of 21% oxygen and then rest is gases that don't participate in the reaction.

Does this mean that the mole fraction of the oxygen stays the same at 0.33 since that's what is reacting, or will it decrease? If it decreases, what does it decrease to?

A fuel cell designed to be fed pure hydrogen and pure oxygen works by separating the combustion of hydrogen into a pair of electrochemical processes that occur at separate electrodes. By design, the hydrogen and the oxygen are separate from each other. They enter the fuel cell in difference places and never come in contact with each other. The protons flow through an ion-conductive membrane. 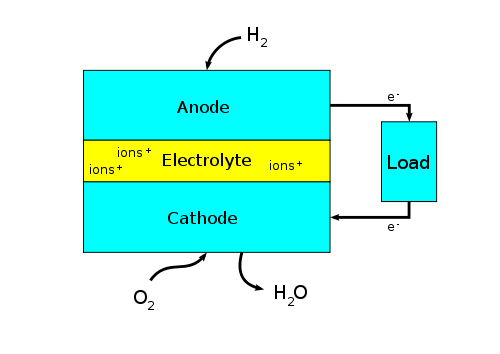 Just because the stoichiometric coefficients are 2:1 does not mean that the gasses will actually be mixed in that ratio - they just react in that ratio. They could be deliberately mixed in other ration to influence the rate of the reaction or the position of equilibrium. In your case, you are using air (21% oxygen) because it is easier than pure oxygen, so your mole fraction is set to the composition of air.

Not the answer you're looking for? Browse other questions tagged physical-chemistry homework electrochemistry equilibrium or ask your own question.