In sp² hybrid orbital, why does the p orbitals only have 3 sides instead of 4?

I'm referring to diagrams such as the one shown below:

So, you plug in three orbitals, and you get out three more orbitals. When drawn in place, you get this: 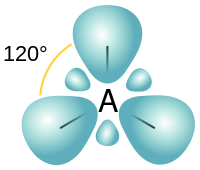 There are a total of six lobes here, but they are distributed amongst three $sp^2$ orbitals.

The number of lobes need not stay constant--it's the number of orbitals that does, since each orbital corresponds to two electrons, and there's no way for new electrons to be added/removed (yet). What's happening is that the wavefunctions(orbitals) of the electrons are "mixing up" to distribute the electrons in a way that stimulates bonding (one per orbital). The lobes have a significance, but it's much deeper.

6
Why do higher orbitals have more energy?
6
Why does symmetry have to be maintained in molecular orbitals?
4
Are the p orbitals of the biradical dioxo compound in the HOMO perpendicular to the plane?
8
Is the hybridization only related to atomic orbitals but not to the molecular orbitals?
1
Electron configuration and the 2p orbital
13
Are all degenerate d-orbitals identical?
1
Why does a neutral atom of beryllium not have any electrons in a p orbital?