What is the Lewis structure for HClO?

In many sites, I see that they put $\ce{O}$ in the middle, but our teacher said that we should put $\ce{O}$ near the extremity. Which is the best way?

Hypohalous acids, like $\ce{HOCl}$, are a point of entry into the "weird" chemistry of halides, which at least in Euopean countries I know is not covered until late in college.

I completely agree with Gonçalo Justino's answer, but would like to add another shade to it.

In principle there are quite a few possible arrangements thinkable for this molecule - at least in the gas phase. In this thought it simply refers to the fact that they are local minima on the potential energy surface. The most stable of all is the one that has been discussed here before. Hypochlorous acid is also one of the compounds that disrupt the ozone cycle. Because concentrations in the stratosphere are low, we can find most possible arrangements of the three atoms. It should also be noted, that these reactions usually occur via a radical pathway.

The bonding situation in these "weird" compounds is not obvious at all, classifying it as a purely covalent bound is equally as wrong as calling it ionic.
Interestingly the $\ce{O-H}$ bond is much more covalent than the $\ce{O-Cl}$ bond, when we look at the most stable, i.e. bent, conformation. I am not going into detail about possible linear intermediates, as they are only very short lived species.
The analysis of a DF-BP86/def2-SVP calculation with the quantum theory of atoms in molecules (QTAIM) shows us this somewhat unexpected behaviour. 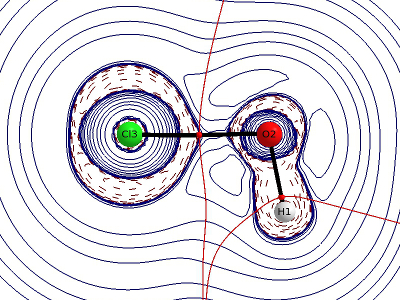 What we see here is that the bond between the hydrogen and the oxygen is strongly covalent as the electron density is $\rho_\mathrm{BCP}(\ce{O-H})=0.34~\mathrm{e\,a.\!u.^{-3}}$ and the Laplacian has a high negative value, $\nabla^2\rho_\mathrm{BCP}(\ce{O-H})=-2.02$, i.e. much charge accumulation. On the other hand the chlorine oxygen bond has quite some ionic character. The electron density is $\rho_\mathrm{BCP}(\ce{O-Cl})=0.18~\mathrm{e\,a.\!u.^{-3}}$, while the Laplacian is slightly positive, $\nabla^2\rho_\mathrm{BCP}(\ce{O-Cl})=+0.01$, i.e. low charge depletion. This makes this bond about half ionic and half covalent. (An ideal ionic bond would have an electron density close to zero and a much larger positive Laplacian value.)
From this analysis it makes sense, that in the gas phase the molecule more likely dissociates via $$\ce{HOCl ->[h\nu] HO + Cl}.$$ In aqueous solution there are quite a few more equilibria at work and the reaction and stability of this compound is highly pH dependent. In general this compound will decompose whenever it gets the chance. 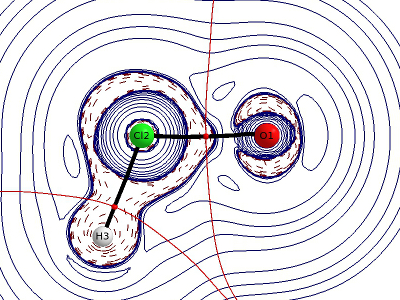 Other possible structures of $\ce{HOCl}$

Any other structure, for example linear or bent $\ce{OHCl}$, are no minima on the potential energy surface. They might exist as excited or transition states, but they are incredibly short lived. One only has to care about these species when dealing with complex gas phase reactions. (There is now way they could be stable in solution.)

While it is theoretically possible to have the oxygen in a terminal position, it is certainly not the ground state. Another aspect to think about is also, how accurately can a Lewis structure represent the molecule. Especially when it comes to small molecules one always has to take it with a grain of salt as most of the theories brake down at this level.
For up to highschool level of chemistry, however, the answer to this question is the one given by so many others before.

Putting the oxygen in the middle is definitely the correct way to go.

The lewis structure of Hypochlorous Acid:

Other answers have shown the chemical correctness well. But from a high school perspective there’s nothing stopping you from drawing the structure differently, is there? Well, let’s look at both possibilities in Lewis structures (lone pairs omitted for clarity):

Consider each atom to abide by the octet rule (hydrogen: dublet rule) and thus the terminal non-hydrogen having three lone pairs and the central atom having two. Which structure is more stable? Consider the following rules:

Thus, both are possible structures (Martin did nice calculations there) but we can correctly predict the more stable structure according to these rules (again taking Martin’s results as a starting point). Your teacher basically told you to skip this analysis and go straight to what is correct.

Not the answer you're looking for? Browse other questions tagged molecular-structure lewis-structure or ask your own question.

1
Which is the central atom in Lewis Dot Structures?