I am looking for a software (can be freeware or purchased) to look up water and steam thermodynamic properties (e.g. density, enthalpy, entropy) preferably a macro in excel. What do you use for this application?

I have access to several programs or similar solutions for the work with so-called steam tables. I usually prefer to use the NIST Reference Fluid Thermodynamic and Transport Properties Database (REFPROP) – NIST Standard Reference Database 23, Version 9. It is a program that can calculate the thermodynamic and transport properties of water and steam as well as some other important fluids and their mixtures. It was developed by the National Institute of Standards and Technology (NIST) and is commercially available here.

Although I usually don’t do this myself, REFPROP can be used with Microsoft Excel. This is described in the corresponding Help file as follows:

The REFPROP Excel front-end is supplied as a Microsoft Visual Basic module. Excel automatically incorporates Visual Basic as a macrofunction execution, scripting and interface utility. When the REFPROP front-end module is imported into an Excel spreadsheet, REFPROP functions become accessible to the user. The proceedure for doing this is described below.

The information given below demonstrates the front end usage; however, the user is not bound to this format; rather, the preferred method would be to write one's own visual basic code that calls the DLL directly. A dedicated module will increase the speed of the application and give the ability to use the REFPROP functions to their fullest.

The following supplementary instructions are intended for users who wish to create and modify their own spreadsheets that utilize the REFPROP functions based on the front-end module. The Excel application included with the software is called REFPROP.xls and is located in the directory where the REFPROP program was installed. Sample FORTRAN and Visual Basic files are also included.

Properties are calculated by calling various functions. For example, the following line would be placed in a cell to calculate the density of argon at 300 K and 10 MPa:

Other properties can be calculated by using any of the following functions:

I downloaded a macro for this many years ago and have since lost it. It might have been this one: http://www.mycheme.com/steam-tables-in-excel/ . That link is worth a look either way.

You can also use Engineering Equation Solver or EES (http://www.fchart.com/ees/).

You get a free Student Version if you buy Cengel's books (http://novellaqalive.mhhe.com/sites/0072383321/student_view0/ees_software.html#)

You can even solve equations, manipulate units, create tables and plot different parameters.

With this software you can simply write rho = density('Substance',T=Temperature,P=Pressure).

Take a look at this screenshot: 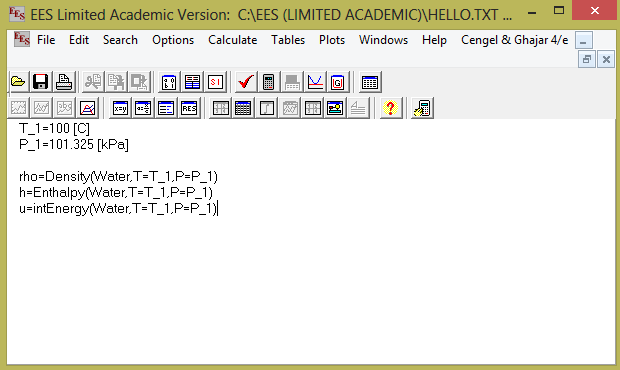 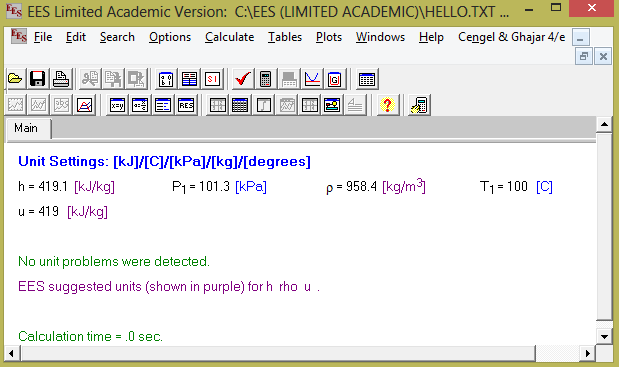 The power of it stands in the ability to use the units. You can also change the references and the standards of tables, without the need to write extra codes.

You should check out CoolProp library. It is a C++ library that implements:

Other free options based on CoolProp

Note: I am the developer of ThermoState

7
Where to find data for Gibbs energy, enthalpy, and entropy?

26
What software can calculate aqueous solution equilibria?
2
How does simulation software work at a fundamental level?
4
Relationship between thermodynamic reversibility and reactions
0
Is there are any universal methods or software for reaction rate modelling?
6
Software to Draw Laboratory Apparatus