Why does the phosphorus trifluoride molecule have dipole moment?

My book says that from drawing the Lewis structure for the molecule below, you can conclude that it has dipole moment. Can someone please explain why? 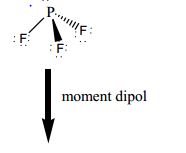 Fluorine is more electronegative than phosphorus.

The phosphorus is at the apex of a pyramid, the base of the pyramid being an equilateral triangle with a fluorine atom at each vertex. The F-P-F angles are 96 degrees.

In some molecules lone pairs also contribute to the net dipole moment, in this particular case the lone pair of phosphorus is in a mostly s-like orbital, so in first approximation it can be neglected.

14
Order of dipole moments
2
Relationship between dipole moment of a molecule and electronegativities of constituent atoms
5
Polarity index vs. Dipole moment
4
Why does acetone have a greater dipole moment than dimethyl ether?
12
Does the dipole moment increase or decrease by increasing the bond length?