Oxidation state of the sulfur atoms in the thiosulfate Ion

What are the oxidation states of the two inequivalent sulfur atoms of the $\ce{S2O3^{2-}}$ molecule? For all I know is that Lewis Structure does matter in most of the cases.

Although both of the above articles are by the same author.

On the other hand, Determination of Changes in Sulfur Oxidation States in Prostate Cancer Cells

there is a difference between formal and apparent oxidation state received from XANES measurements, for example the apparent oxidation states of sulfur in thiosulfates, obtained from XANES data, are -1 and +5, while the formal ones are -2 and +6. Such a difference could occur due to the calibration curve which has been done on the basis of chemical compounds in which there are ionic bonds which isn't true in the case of thiosulfates.

However, it must be kept in mind that according to the current IUPAC definition, the oxidation state is not an actual property of a substance but instead a charge "an atom might be imagined to have", specifically:

In "Expanded Definition of the Oxidation State" there is a proposed addition to the definition:

Bonds between like atoms (having the same formal charge) are cleaved homolytically.

If an S=S double bond of thiosulfate is cleaved homolytically, 0 and +4 oxidation states result.

If an S-S single bond of thiosulfate is cleaved homolytically, -1 and +5 oxidation states result.

However, the article concludes 0 and +4 oxidation states even with the single bond, because when there is a single S-S bond the two S-S atoms do not have the same formal charge. They give both electrons from the S-S single bond to the central S. Below is Fig. 4 from the article: 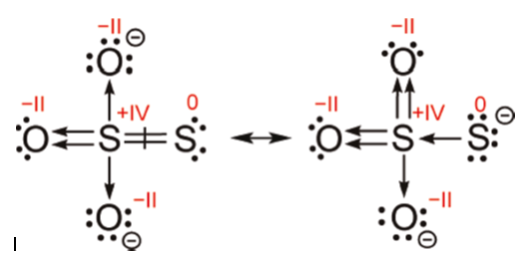 The most recent (June 2014) information (and probably most authoritative) I can find is Toward a comprehensive definition of oxidation state (IUPAC Technical Report) Pure and Applied Chemistry. Volume 86, Pages 1017–1081

In this article, another definition of Oxidation State is proposed requiring

Bonds between two atoms of the same element are divided equally.

with no exceptions for formal charges. This clearly rules out the possibility of -2, +6 oxidation states for the S atoms in thiosulfate, but leaves ambiguity between-1, +5 if the S-S bond is single and 0, +4 if the S=S bond is double.

The result in Fig. 24 means that the individual OS of the two sulfur atoms in thiosulfate are ambiguous, and no formula in-between these two limits yields reasonable values. The formula on left provides an unusual yet not entirely illogical OS of −1 for the terminal sulfur, reminiscent of the oxygen OS in peroxides. The formula on right, while having an SS bond order that is too high, suggests OS values that at times are used...

The article also comments that:

A nominal OS is one that has been nominally adjusted against the generic OS definition in order to suit a specific purpose. That purpose may be...polarizing a homonuclear bond in thiosulfate to OS [of S] = +6 and −2 in order to emphasize the uniqueness of the central atom and similarity of all four ligands.

I'm not unsympathetic to MAR's answer. It is logical to consider sulfur's "usual" oxidation state to be the same as oxygen: -2. However, the fact that the two sulfurs are bonded to each other suggests that the oxidation state should be considered differently. Below is a systematic method that gives an answer (+5/-1) that matches the experimental data nicely summarized by DavePhD.

Now, we add an oxygen to one of those sulfurs. Oxygen is (almost) always -2. To keep the overall charge -2, that means that the newly bonded sulfur is oxidation state +1.

Oxidizing that sulfur again gives sulfurs of +3 and -1. Finally, in thiosulfate the oxidations states are +5 and -1.

Draw the lewis structure of thiosulfate.

How is oxidation state measured? It's a crude way of attributing some charge to the atoms.

O is more electronegative than S. You have S as the central atom, and another S "around" the tetrahedron structure. What would that do to each S?