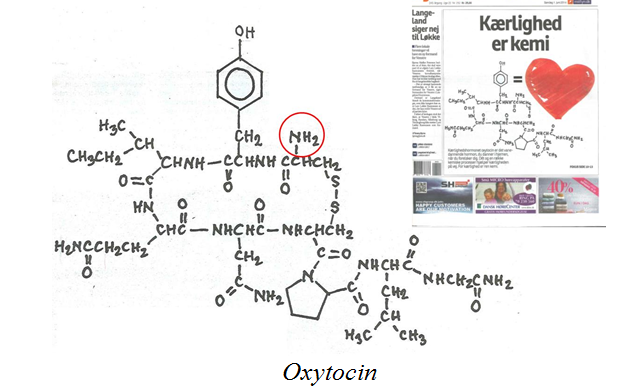 I am asked to hydrolyze Oxytocin and reveal 5 amino acids which are the result of this hydrolysis.

I must admit I have no idea where to begin. I know that generally amino acids are on the form of $\ce{NH_2-CH(R)-COOH}$, so perhaps looking at these double bonds to oxygen may be a starting point, as I assume they will become the acid group? But I really don't know how to move forward from there!

You are on the right track. $\ce{NH_2-C(H)R-COOH}$ is the formula for an alpha amino acid, one where the amino group of the molecule is attached to a carbon atom one carbon atom away from the carboxylate carbon. This is the most common type of amino acid found in biochemistry. (A beta amino acid would be $\ce{NH_2-C(H)R^2-C(H)R^1-COOH}$).

When amino acids condense into a polymer or oligomer they do so by forming peptide bonds, also called amide bonds.

So to find the places in oxytocin that would be hyrolyzed into amino acids, look for individual carbon atoms that are attached to both (i) an oxygen atom via a double bond and (ii) a nitrogen atom while (iii) not being attached to any other heteroatoms. (Item (iii) is generally necessary to exclude other functional groups such as carbamides or carbamates, but these groups are not found in oxytocin.) For oxytocin, your impulse to look just at carbon double-bonded to oxygen (item (i) only) is OK, but be warned that this procedure is not precise enough in general, because molecules with e.g. ketone moieties will have C=O bonds but will not be hydrolyzed.

Not the answer you're looking for? Browse other questions tagged organic-chemistry hydrolysis proteins amino-acids or ask your own question.