But ... both propanoic acid and acetone enol involve an $\ce{sp^2}$ carbon bound to an alcohol group ... why does $\ce{SOCl2}$ work in one case but not in the other?

I think it instead has to do with the nucleophilicity of the electrons involved with oxygen ... the mechanism starts with electrons associated with oxygen attacking thionyl chloride. A regular alcohol has an oxygen with lone pairs that aren't fairly "free," so to speak. An carboxylic acid has resonance donation enhancing the nucleophilicity of one oxygen's lone pairs. In acetone, however, there is no resonance donation ....... (inductive donation, sure).

Ultimately, the difference is that the carbon of an enol is not readily attacked by a nucleophile, while the carbons in the other substrates can be. Each of the reactions go through the same first step(s): addition of the hydroxyl to sulfur with chloride leaving sulfur (likely through addition/elimination, not shown below). However the next steps are different depending on the functional group of the substrate. For an alcohol, chloride attacks the activated alcohol (looks very much like a sulfonate) in an SN2 reaction to give the alkyl chloride. For a carboxylic acid, chloride attacks the carbonyl carbon, and after addition/elimination (not shown in detail), the acid chloride is produced. Starting from an enol, reaction with thionyl chloride gives an enol chloro sulfate. Unlike the sp2-carboxylic acid case, the pi bond doesn't have an effective electron sink (such as oxygen), which means that the reaction would have to be a direct SN2 displacement. As I'm sure you learned, SN2 at sp2 carbons is very slow. 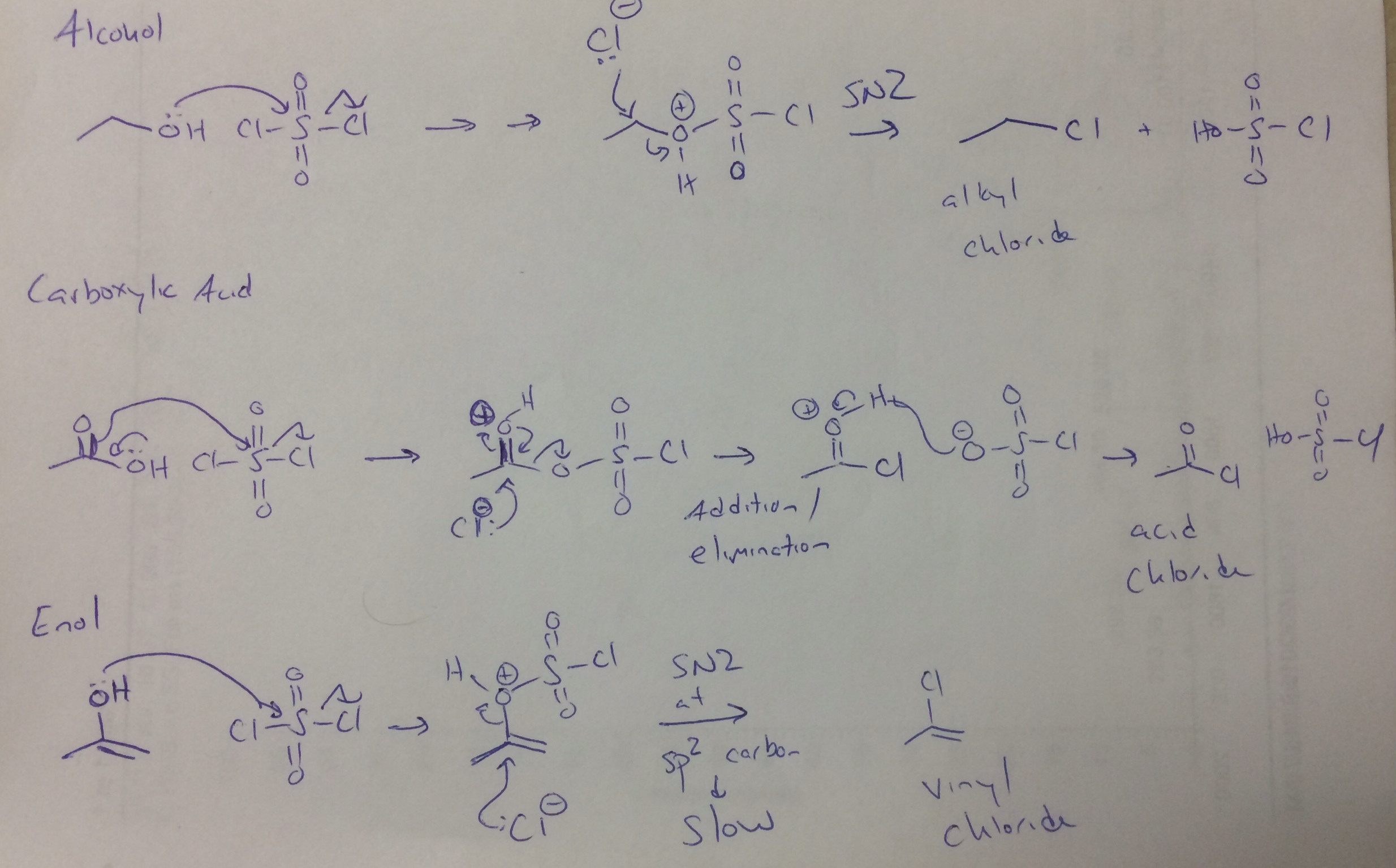 A SciFinder search shows that other reagents, notably phosphorus pentachloride can accomplish the transformation.

14
Oxygen or carbon with a positive charge? (comparison of canonical structures)
3
Proper Resonance Structures
3
Synthesis of synthetic detergent with Friedel Crafts Acylation
10
Inductive vs resonance effects and the acidity of phenol
8
Synthesize acyl chloride from aldehyde
3
SN2 with thionyl chlorides
0
Which base accepts the proton abstracted from water in propyne hydration?
0
Reaction of urea and thiourea with nitrous acid
2
Reaction of carboxylic acid with phosphorus trichloride