How to know when electrons will be added onto Lewis Structure from surrounding atoms to become ion?

How do I know when I should add an electron to a single electron? Do I just always do this? I've came across this in the textbook in the form of the amide ion $\ce{NH2}$, among others. It was shown to have 8 electrons, despite nitrogen only having 5 valence electrons, and each hydrogen only having 1. The last came from some surrounding atom to complete the outer shell and thus become more stable. So, do I always do that when there is a single electron not part of a pair?

I think I know where your confusion comes from. Firstly, I would want to note an important point:

Covalent bonds consist of pairs of electrons shared by two atoms, and bind the atoms in a fixed orientation. Chemwiki.UCDavis

This is the characteristic that makes them different from ionic bonds. The surrounding atom will not become an ion in its full sense.

I would want to describe a way of drawing Lewis electron dot structures that will avoid any confusions.

We have two Hydrogen atoms and an Oxygen atom to begin with. They have this lewis structure: 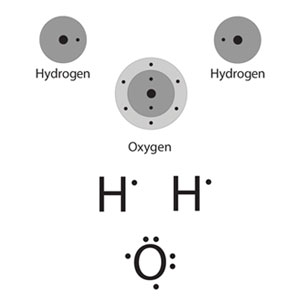 Follow these instructions for "normal" molecules (the ones that abide octet in a perfect sense):

With the information you just gathered you can draw the lewis structure for most of the covalent compounds. In the case of water, 4 bonding es mean two covalent bonds, right? Plus, H has no other electrons than it's only one. So O has 4 nonbonding electrons. Thus, you may come to something like this: 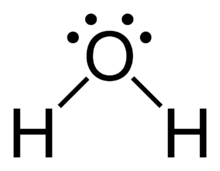 In ions, we have to take the charge of the ion into an account. Positive charge means lesser electrons than a neutral species, and negative charge means more es in a comparison with a neutral covalent compound. Thus, we should add to or subtract from $\text{n}_v$.

So let's get on with this thing's lewis structure:

There is an important thing to note here. Nitrogen has 5 es in valence shell, but ends up having four bonds. This is because an H atom had lost it's electron to become n ion AND, with an empty orbital. So, N shares two electrons instead of one which is described as dative covalent bonding. We get this structure in accordance to the calculations and thoughts:

Now this case is easily solvable through the explanations for ammonium.

Put some thinking, and you should get this (ignore the other ones if you like):

0
Definition of nucleophile
3
Protonation of Guanidine
4
Are the Phosphate and Sulfate ion diagrams with double bonds an invalid picture?
1
Which lone pairs/bonding pairs go into which pi molecular orbitals?
4
Is it possible to use the school supplied algorithm to build the Lewis diagram of the iodate ion?
7
Which rings of this heterocyclic compound are aromatic?
1
Confused about identifying delocalized electron pairs in Isoniazid