I'm a bit confused when asked to specify the chiral carbons on this sketch of Propranolol as I'm not sure how the $\ce{H3C}$ and $\ce{CH3}$ play in if they are reversed in the name like that...Does that even matter?

I'm pretty sure the only chiral carbon is the one in the middle of those and the $\ce{NH}$. I've heard that you need 4 different groups/atoms surrounding the carbon for it to be chiral but how much truth is there in that, as I've found several with only 3? 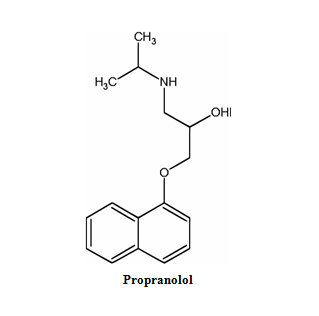 As stated in user208322's answer, $\ce{CH3}$ and $\ce{H3C}$ are exactly the same, they're only written differently for ease of reading. As per your question about how much truth there is to having 4 groups, it's 100% truth. You cannot have a chiral carbon that doesn't have 4 groups attached to it (i.e. must be sp3 hybridized). If you think you've found a chiral carbon that only has 3 groups attached to it, you're probably forgetting the unwritten hydrogen.

Edit: In regards to your question about following the chain all the way down, realistically you only need to follow it until you see that it differs from the other chains. So for chains 1 and 3 once you get to the nitrogen and oxygen atoms you see that they're different and there's no point continuing. And the unwritten hydrogen has to do with the fact that organic chemists use shorthand in their molecular structures. Basically, carbons and hydrogens are extremely common in organic molecules so they just don't write them. All the points are carbons unless otherwise labelled, and they must have 4 bonds, so where you see that the carbon is only bonded to 3 things, it is also bonded to a hydrogen as well. See this wikipedia article for more info (specifically, this section).

$\ce{CH3}$ and $\ce{H3C}$ mean the same thing — methyl — But are written that way to show the C is attached directly. It is obvious, but people prefer writing it that way to show attachment.

And I can see only one chiral atom. These are are such that none of the groups directly attached are same.

Not the answer you're looking for? Browse other questions tagged organic-chemistry biochemistry chirality drugs medicinal-chemistry or ask your own question.

1
Drawing (R)-1,1,2-trimethylcyclohexane
3
Determination of structure by 13C and 1H NMR spectroscopy
2
How to assign priorities around the asymmetric carbon with its substituents having multiple bonds?
0
Trouble with Converting from Structural Formulas into Newman Projections
9
Why are carbons of Inositol chiral centers?
5
The maximum no. of isomers (including stereoisomers) that are possible on mono-chlorination of the compound: 3,3-dimethylpentane is?