You don’t see carbocations on double bonds very much, and here's a good reason: compared to sp3, there is more s character in the orbitals, so the empty orbital is held more closely to the nucleus. This is destabilizing if we’re talking about positive charge.

This doesn't really make sense. Positive charge arises from the lack of electrons. How does holding an empty orbital (regardless of whether that makes any physical sense) closer affect your stability if the empty orbital is ... empty?

So, what is the exact reason sp2 (aren't most carbocations sp2 though?) and sp carbocations are generally less stable than their sp3 counterparts?

Also, how can we have an sp3 carbocation? Huh?! 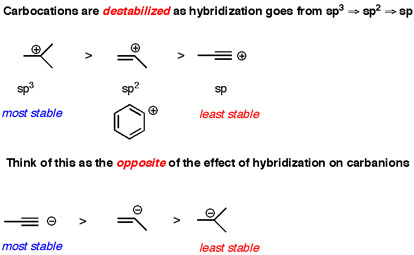 Here are links to 2 earlier answers where this question has been addressed for vinylic and aryl carbocations.

When vinylic carbocations are generated, the empty orbital (the orbital holding no electrons) is intitially $\ce{sp^2}$ hybridized. This carbonium ion orbital being $\ce{sp^2}$ hybridized is using some s character, the remaining orbitals around the carbonium ion carbon will therefore have less s character available for use in their bonds. The more s character in a bond, the lower the energy of the electrons in that bond because s orbitals are lower in energy than p orbitals.

If the vinylic carbocation rehybridizes such that the empty orbital becomes a p orbital, then the remaining orbitals that contain electrons will become lower in energy as they rehybridize and incorporate the s character that was initially used in the empty $\ce{sp^2}$ carbocation orbital. Once rehybridized the carbocations overall energy has been lowered and the carbocation is more stable.

Also, how can we have an sp3 carbocation? 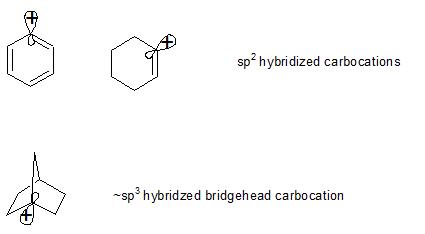 Let's just tackle the obvious part first: There is no sp3 carbocation. One reason for this is the same, as for why higher substituted carbocations are more stable than lower substituted. Electrons are more stable in orbitals with high s-character.
In $\ce{\overset{\oplus}{C}(CH3)3}$ the cationic carbon is sp2 hybridised while the empty orbital is 100% p character. All s character is used in occupied orbitals.
In $\ce{H2C=\overset{\oplus}{C}-CH3}$, one would assume from the common depiction, that the central cationic carbon is also (roughly) sp2 hybridised. My first draft of answering did also assume this. A quick DF-BP86/def2-SVP calculation revealed something different. The $\angle(\ce{CCC})$ bond angle comes out to be almost exactly $180^\circ$. The $\pi$ bond is obviously only of p character. The underlying $\sigma$ bonds can now contain the whole s character, making it sp hybridised, and as a result the p orbital of the cationic carbon atom is empty. There will be interactions with some carbon hydrogen bonds. (Hyperconjugation, see below.) This effect is most likely much less than in the prior case, causing it to be less stable. In addition to this, the molecule is much more constrained in its geometry. This linear arrangement is probably also only true for this very simple arrangement. Dependent on the moieties attached to it, a bent structure might be more stable and a different bonding angle will be observed. When that happens, there will be some s character in the empty orbital.
In the benzyl cation, due to symmetry restrictions, $D_\mathrm{2h}$, the empty orbital must be almost exactly sp2. Hence the underlying $\sigma$ bonds will roughly take away 67% s character. The empty orbital will therefore have a very high s character, about 33%, as a result. There is almost no bond widening possible to decrease this and successively increase s character in the $\sigma$ bonds. So the s character found in empty orbitals effectively destabilised the remaining occupied orbitals. (One could also think about it as some kind of ring strain.)
In $\ce{H3C-C#\overset{\oplus}{C}}$, symmetry is even higher, $C_\mathrm{\infty{}v}$ for the triple bond. The underlying $\sigma$ bond will have slightly more s character than in an ideal sp orbital. The empty orbital will, however, be binding a lot of s character. This is effectively destabilising the occupied orbitals again. Since the empty orbital contains the most s character in the orbital, it will also have the most destabilised $\sigma$ system of the series.

Note
There are of course other reasons for higher substituted carbocations to be more stable than lower. One of the main effects is hyperconjugation of the $\sigma(\ce{C-H})$ bond with the empty p orbital.

Not the answer you're looking for? Browse other questions tagged theoretical-chemistry orbitals hybridization or ask your own question.

23
Why are vinylic and arylic carbocations highly unstable?
5
Is an SN1 reaction possible in halobenzene?
-2
On the stability of carbocations

65
Why do elements in columns 6 and 11 assume 'abnormal' electron configurations?
84
Why is the 2s orbital lower in energy than the 2p orbital when the electrons in 2s are usually farther from the nucleus?
6
Why do higher orbitals have more energy?
4
Correlating the decrease in orbital radius and penetrating power with the increase in l value
13
Are carbocations necessarily sp2 hybridized and trigonal planar?
0
stability of a negative charge in halogens and that of orbitals
1
Why are s orbitals more “penetrating” than p orbitals?