How to rationalise the difference in halogen bonding?

Can anyone explain the difference in halogen bonding to me. I understand the explanation in (c). It appears to me, that accepting that would contradict the answers to parts (a), (b), and (c).
Is the reason for part (a) because the first molecule does not have resonance and for (b) the $\ce{F3C-I}$ molecule has a larger inductive effect? If so, that would not make sense for (c) to be correct. 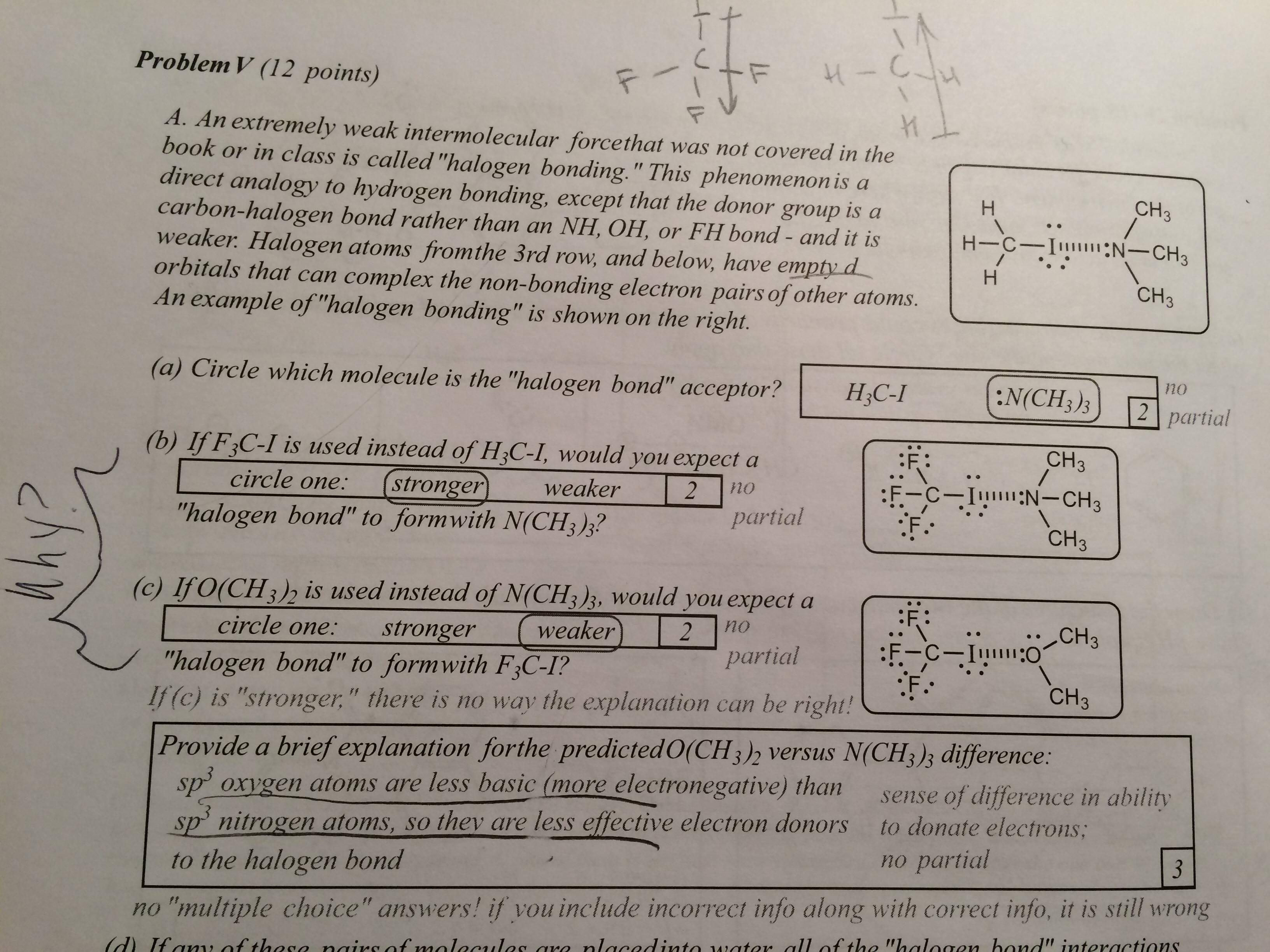 A halogen bond can, quite analogous to a hydrogen bond, be considered a mostly electrostatic interaction with some covalent interaction. Hence the halogen bond acceptor is the electron donating molecule, i.e. a Lewis base. The halogen (bond) takes the role as the Lewis acid.

In (b) you compare $\ce{H3C-I}$ and $\ce{F3C-I}$. Fluorine is more electronegative than hydrogen, and the statement $$\angle(\ce{H-C-H})>\angle(\ce{F-C-F})$$ holds. The carbon directs mor $\ce{p}$ orbital character into the carbon fluorine bonds than in the carbon hydrogen bonds. As a consequence the $\ce{s}$ orbital character in the carbon iodine bond (from the carbon) is higher in $\ce{F3C-I}$ compared to $\ce{H3C-I}$. That causes the bond to be slightly shorter and having more electron density at the carbon. This is also making the iodine a little more electron deficient and a better electron acceptor, i.e. a stronger acid (see also Bent's Rule). The electronic interaction will therefore also be slightly stronger.
This observed effect is also often called inductive effect, which like you correctly stated is larger in $\ce{F3C-I}$.

In (c) you are comparing the Lewis bases $\ce{NMe3}$ and $\ce{OMe2}$ acting towards $\ce{F3C-I}$ (or $\ce{HC3-I}$, the reasoning would remain the same). Oxygen is more electronegative than nitrogen, hence the lone pair orbitals of oxygen are more compact, i.e. the maximum electron density is closer to the oxygen nucleus. This causes dimethylether a weaker electron donor. Hence the the oxygen iodine interaction in $\ce{F3C-I\bond{~}OMe2}$ can be expected to be weaker than the corresponding nitrogen iodine interaction in $\ce{F3C-I\bond{~}NMe3}$. (Just like it is stated in your sheet.)
Additionally, since methyl groups are usually slightly electron donating, and trimethylamine has one more methyl group than dimethylether, it can be expected to be an even better electron donor, stronger base.

Resonance does not contribute to these bonding situations in a significant way. (Looking at this from a valence bond perspective would certainly exceed this format and it is not necessary for a good model explanation.)

Not the answer you're looking for? Browse other questions tagged homework bond electronegativity halides or ask your own question.

26
Are the bonding orbitals in methane equivalent - photoelectron spectrum
13
Bonding in Square Antiprismatic Compounds
7
Is the inductive effect always measured relative to hydrogen?
6
Relative acidity of p-chlorobenzoic acid and p-flurobenzoic acid
11
Friedel–Crafts alkylation of benzene with tetrachloromethane
2
Change in inductive effect of a susbstituent when -R group replaces -H atom
5
For molecular orbitals, how is an energy of zero set or defined?