Does the probability of fluorescence increase when energy of incident X-rays match the electron's binding energy?

When analyzing manganese-rich samples with X-ray powder diffraction, sample fluorescence becomes a significant effect. Is this because the incident X-rays' energy - which, if Cu K$\alpha_1$, is approximately 8.048 keV - is getting close to the K$\alpha_1$ (approximate binding energy) of the inner-most electrons of Mn (5.899 keV)?

Sample fluorescence from Fe and Co is even stronger, which fits with the trend mentioned above. So, is this indeed a trend? If not, how do I generalize the increase in probability for sample fluorescence?

As you note, the fluorescence signal is strongest when the exciting photon has an energy close to the excitation energy for the element absorbing the photon. There are actually two factors coming into play:

1) The closer the resonance of the incident photon with the electronic orbital it is exciting, the higher the cross-section to absorb the photon. (See here.)

2) The higher-Z the absorbing atom, the more likely it is that once excited, the atom will emit a fluorescence photon (as opposed to an Auger electron). That is, it has a higher fluorescence yield. (See here.)

In your case, the Z of the atoms are pretty close, but also in portion of the periodic table where the fluorescence yield is rapidly changing. The chance of a fluorescence photon being emitted once excited is about 20% greater for Co than Mn (and you can look it up in the literature).

The cross-section for absorption as a function of energy for these three elements looks like this (code for the plot here): 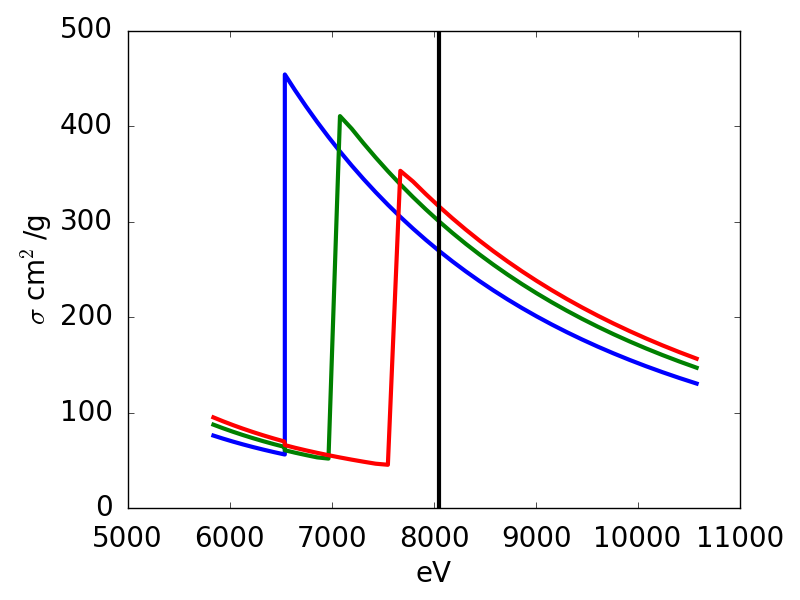 I also drew a vertical line for the exciting Cu-K$\alpha$ photon at 8048 eV, and you can see that the Co curve has the highest cross-section at about 316 cm$^2$/g, and Mn has the lowest at about 270 cm$^2$/g, which means the Co cross-section is about 17% higher than the Mn. The primary reason for the reduction in the sensitivity for the Mn edge is that the absorption cross-section drops off as $\approx\Delta E^3$. These data were plotted using the data files described by B. L. Henke, E. M. Gullikson, and J. C. Davis, Atomic Data and Nuclear Data Tables Vol. 54 No. 2 (July 1993)

So both these effects are colluding to increase your fluorescence for Co vs Mn.

As a note, if you want to reduce this effect in your X-ray diffraction patterns, you can change your source target material with a heavier element such as Zr which has it's K$\alpha$ up at 15.7 keV, yet the L lines are still around 2 keV (below the transition metal K-edges) or you can use a lighter target, such as Mn. Mn, of course, would not be able to excite its K-edge using its own K$\alpha$ fluorescence photon.