Why is aluminium carbide bent?

The geometry of aluminium carbide is attached. Why isn't it completely linear (in accordance to VSEPR), but bent on the Al atoms? 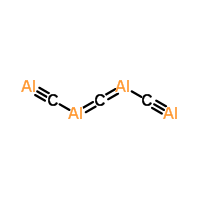 That structure is incorrect. Several online chemical distributors have similar structures posted in their entries for aluminum carbide; so does PubChem! Some sources show the structure as linear; some show it as bent.

That structure basically assumes that aluminum forms primarily covalent bonds with an "incomplete octet" in VSEPR structures, rather like boron. But aluminum atoms are a lot larger and more metallic than boron atoms, and its compounds will have comparatively more ionic character. $\rm Al_4C_3$ isn't a molecular compound.

Cotton & Wilkinson's Advanced Inorganic Chemistry says that aluminum carbide "reacts instantly with water to produce methane, and X-ray studies have shown it to contain discrete carbon atoms (C-C = 3.16 Å); for these reasons it is sometimes considered to be a "methanide", that is, a salt containing $\rm C^{4-}$, but this is probably an oversimplification."

This is the structure that's posted on Wikipedia:

It says that "Aluminium carbide has an unusual crystal structure that consists of two types of layers. It is based on AlC$_4$ tetrahedra of two types and thus two types of carbon atoms. One is surrounded by a deformed octahedron of 6 Al atoms at a distance of 217 pm. The other is surrounded by 4 Al atoms at 190–194 pm and a fifth Al atom at 221 pm." This is attributed to Greenwood's Chemistry of the Elements, but I don't see it in the edition I have.

Not the answer you're looking for? Browse other questions tagged vsepr-theory molecular-structure or ask your own question.

1
Bent molecular geometry of water
0
Predicting electronic geometry, observable geometry, and hybridization for any atom in a molecule
2
Which species occupy the equatorial positions in VSEPR's trigonal bipyramidal and octahedral geometry
4
Valence Bond theory, VSEPR theory and predicting the shapes of the molecules
2
Why is the molecular structure of water bent?
4
Molecular geometry of BaH2 according to VSEPR theory