In one of the exams I saw it was written that dehydration of 1-methyl-cyclobutanol yields cyclobutylmethylene (double bond outside the ring) which is the anti Zaitzev product, instead of methylcyclobutene. Why? Thanks!

tl;dr
The thermodynamic product of the dehydration reaction of 1-methylcyclobutan-1-ol is 1-methylcyclobut-1-ene, not methylenecyclobutane. This is supported by [1],[3] and my own calculations.

Some details
I was unable to find any reference to why the dehydration of 1-methylcyclobutan-1-ol should yield methylenecyclobutane (3) as the main product. From what I could gather up until now, the major product is 1-methylcyclobut-1-ene (1). I also tried finding suitable mechanisms and/or protonation (hydration) energies for these two molecules according to the following scheme, to compare their relative thermodynamic stability to each other.

Lajunen and Himottu quite similarly report, that 1 is more stable than 3 by about $4.3~\mathrm{kJ/mol} \approx 1~\mathrm{kcal/mol}$. They obtained this value via equilibrium constants measurements in perchloric acid.[3] This would in return translate to a ratio of 1 : 3 of about 1.0 : 0.2. It is also reported, that the transition states of protonation are quite similar, but lower for 1.

I also conducted some quantum chemical calculations, using DF-BP86/def2-SVP and the more sophisticated MP2/def2-TZVPP. These are in reasonable agreement with the previous findings. The enthalpy differences, approximated at $T=298.15~\mathrm{K}$ and $p=1~\mathrm{atm}$, are $1.4~\mathrm{kcal/mol}$ and $1.3~\mathrm{kcal/mol}$ respectively. This gives a 1:3 ratio of about 1.0 : 0.1. (More values, as well as the proton affinities (PA),[4] yielding 2, are given in the table at the end.)

It is not surprising, that these structures are quite similar in energy. They both contain a four membered ring. In 1 two $\ce{sp^2}$ centres are present in the ring, forcing planarity. As a result of the shorter double bond, two angles are slightly larger than $90^\circ$, while two are forced smaller. 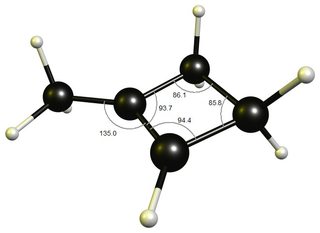 In 3, only one $\ce{sp^2}$ centre is present. However, the dihedral angle is a mere $18.4^\circ$, the out-of-plane angle is $26.8^\circ$, respectively. This is apparently not enough to significantly reduce ring strain. Because of symmetry constraints, i.e. $C_\mathrm{s}$, this arrangement forces three inner ring angles to be larger than $90^\circ$. 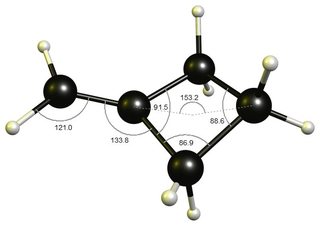 The concept of ring-strain, or strain in general, is not well defined and it cannot be measured directly. There are relative methods, to obtain this virtual quantity, sometimes involving hypothetical molecules. There are different reference systems and as far as I am aware none of them are considered the ultimative choice. In this sense, any arguments can be made. It is therefore also almost impossible to derive ring strain from just a pen-and-paper exercise, especially when the molecules are that similar.

Assumption: The dehydration is probably occurring under acidic conditions. The hydroxyl group is protonated and then eliminates water to generate the methylcyclobutyl carbocation pictured below, an E1 reaction mechanism is likely involved. As you note, the carbocation can eliminate a proton from two different types of adjacent carbons; a methylene group (there are two) in the ring or the methyl group outside the ring.

Terms like "Zaitzev" and "Hofmann" elimination generally are used in discusing E2 eliminations. In the E1 case at hand, elimination to form the cyclobutene is statistically favored (there are 4 alpha-methylene hydrogens and only 3 methyl hydrogens), but disfavored energetically. Cyclobutene is ca. 4 kcal/m less stable than cyclobutane due to increased ring strain from placing the double bond inside a 4-membered ring. Instead, the lower energy Hofmann product, with the double bond outside the ring, is formed.

As a rule of thumb, a 1.4 kcal/m difference in product stabilities results in a factor of 10 shift in an equilibrium between the two products at room temperature. In other words, if product A was 1.4 kcal/m less stable than product B, and A and B were in equilibrium, then we would expect a 10:90 A:B product ratio at equilibrium. In E1 acid catalyzed dehydration reactions the final products are usually in equilibrium. Since the exo-methylenecyclobutane is roughly 4 kcal/m more stable than the methylcyclobutene isomer, we might expect them to be present in something like a (4/1.6 = 2.5) 99.5 : 0.5 ratio, respectively. An introductory textbook might well say that the cycobutene isomer is "not present."

The information contained in @Martin 's post strongly suggests that methylenecyclobutane is less stable than 1-methylcyclobut-1-ene. The model compounds (cyclobutane and cyclobutene) I used in the above analysis were apparently inadequate.

Still, this leaves unanswered the OP's question about why elimination from 1-methyl-cyclobutan-1-ol occurs towards the methyl group to produce methylenecyclobutane. Since the OP didn't specify reaction conditions I assumed (above) that the reaction was run under E1 conditions. From the relative stabilities Martin has provided, we now see that an E1 mechanism would be expected to produce the "wrong" product, 1-methylcyclobut-1-ene.

Instead of an E1 process, let's examine the possible outcomes under E2 (simultaneous elimination of the leaving group and hydrogen, no carbocation intermediate) conditions. E2 eliminations occur with the leaving group and the hydrogen atom in an anti-periplanar configuration. If we use Newman projections and examine the possible conformations that would favor elimination into the ring, we see that an anti-periplanar arrangement of the hydroxyl group and the adjacent ring methylene hydrogens (with the constraint of a cyclobutane ring) is not possible (figure A). However, the Newman projection for elimination towards the methyl group to create methylenecyclobutane does have an anti-periplanar conformation accessible. Hence, if the reaction proceeds through an E2 mechanism, we would only expect the Hofmann product, methylenecyclobutane to form.

Perhaps the OP will add the reaction conditions shown on the exam. 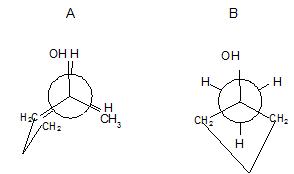 Under acid conditions, cyclobutylmethylene (methylenecyclobutane) isn't even the second most abundant product experimentally. Instead:

According to The Rate of Hydration of Methylenecyclobutane and the Effect of Structure on Thermodynamic Properties for the Hydration of Small Ring Olefins J. Am. Chem. Soc., 1957, 79 (14), pp 3724–3729

A solution 0.9 M in 1-methyl-1-cyclobutanol and 0.3 M in $\ce{HClO4}$ was heated at reflux temperature for several hours, during which time a stream of nitrogen was swept through the system and the exit vapors were passed into a liquid nitrogen trap. The olefin sample collected was analyzed by infrared spectra in a 10-cm. gas cell at a pressure of 4.9 cm. The analysis indicated the decomposition product to be a mixture of approximately 45% 1-methyl-1-cyclobutene, 35%, isoprene and 20% methylenecyclobutane. The formation of isoprene readily is pictured in the dehydration of 1-methyl-1-cyclobutanol in terms of a Whitmore [Beta]-cleavage of a C-C bond of the cyclobutane ring. An estimate of the relative thermodynamic stability of the endo and exo isomers may be made from the present results. Assuming the composition of the dehydration product given above to provide a rough measure of the relative rates of formation of the two olefins from aqueous carbinol solution at 25 [degrees C] one may calculate from this and the relative hydration rates, kp, that the free energy of formation of gaseous 1-methyl-1-cyclobutene is on the order of 1,5000 cal./mole more negative than that for methylenecyclobutane.

0
Can grignard reagents react with any electrophillic sites?
17
Would the carbocation intermediate undergo rearrangement?
1
On the relative ease of E2 dehydration
3
Predicting product ratio by rearrangement in Dehydration Reactions
2
Dehydration reaction of an alcohol, 2,3-dimethyl-2-phenylbutan-1-ol, with conc. sulfuric acid (at high temperature)