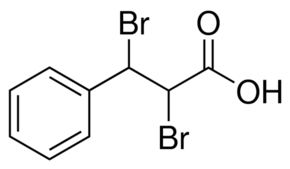 The above is a picture of α,β-dibromohydrocinnamic acid (2,3-dibromo-3-phenylpropanoic acid). In the lab today I carried out an elimination reaction on this molecule using potassium carbonate giving the carbonate anion as a base. I thought about the mechanism and I initially thought that the base would attack the hydrogen on the leftmost carbon atom (out of the two with the bromine atom on it) as I thought that this would be the most acidic proton of those two carbon atoms because of resonance available with the aromatic ring. However, the proton on the carboxylate group is surely the most acidic. How does this effect things in terms of the mechanism and the product?

Dibromohydrocinnamic acid can eliminate in a number of different ways as shown in the following diagram. I'm not sure what conditions lead to cinnamic acid, but I know it can happen. You have recently been asking questions about E1 and E2 eliminations, so my guess is that you are running a well-known lab experiment that generates cis- and trans-bromostyrene and allows the student to study the effect of reaction conditions on the mechanism of an elimination reaction. 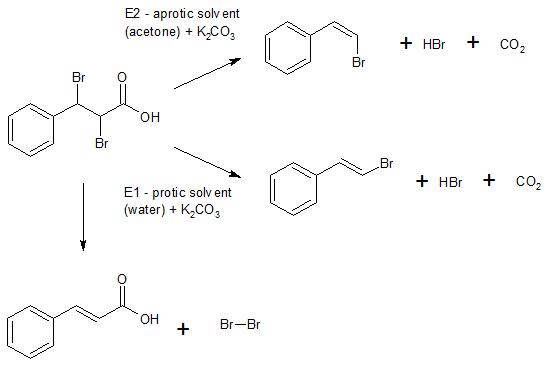 Usually, the experiment starts with the bromination of trans-cinnamic acid. The bromination is run under conditions that lead to trans-addition of bromine so that only the erythro (see here for diagrams and mechanism) or (S,R) [and its mirror image (R,S) enantiomer] dibromocinnamic acid diastereomer is formed. The other dibromohydrocinnamic acid diastereomer, the threo isomer [(R,R) and its (S,S) enantiomer], which can only be formed by cis-addition of bromine is not produced.

If you build a model or draw a Newman projection it will make it easier to understand what follows.

Using the erythro [(S,R) and (R,S)] diastereomer obtained from the above bromination, running the elimination reaction in a solvent like acetone (a solvent that won't stabilize a carbonium ion as much as protic solvents like water or methanol) you drive the mechanism towards the E2 elimination side. With your model or drawing, put the carboxylate group (the base has removed the acidic carboxylic acid proton to produce the corresponding carboxylate anion) and the bromine on the next carbon in an anti-periplanar arrangement (you've discussed anti-periplanar in your earlier questions on the E2 mechanism) and see how in a one-step, concerted elimination of both carbon dioxide and bromide you wind up with the cis-bromostyrene isomer.

If you ran the reaction in a protic solvent (like water or methanol) that stabilizes carbonium ions, you push the reaction towards the E1 mechanism involving loss of the bromine adjacent to the benzene ring to produce a stabilized benzylic carbonium ion. The stable carbocation ion has an appreciable lifetime and will rotate so 1) the soon-to-be-departing carboxylate group is lined up with the carbocation p-orbital on the adjacent carbon and 2) that the benzene ring and remaining (bulky) bromine are as far apart as possible (the lowest energy conformation). Elimination of carbon dioxide from this conformation produces trans-bromostyrene.

Typically, the student is given several test tubes and the reaction is run under a variety of conditions where solvent and reagents are changed and then the amounts of cis- and trans-bromostyrene are measured by nmr. From this information the student can see how solvent and reagent can shift the mechanism. See this link for a bit more detail on the actual experiment along with some good Newman projections.

BTW, the lab should smell nice since the trans-bromostyrene produces a hyacinth-like odor.

5
Why would a polar protic solvent favor the addition of HBr to an alkene?

2
Reaction of ethylacetoacetate with Iodine
7
Decarboxylation / Elimination type reaction
4
Why are acid catalysed reactions of carbonyl compounds reversible?
0
Reaction of urea and thiourea with nitrous acid
9
Why does a proton prefer to attack a double bond instead of protonating an alcohol in a reaction of unsaturated alcohol with sulphuric acid?
0
Why can alcohol undergo elimination just by sulphuric acid?
1
Cyanide hydrolysis; could it yield an oxime?