I am trying to determine the electron pair geometry (and molecular geometry) of some atoms in ibuprofen. The first one I am trying to do is the double bonded oxygen. Ibuprofen is pictured below: 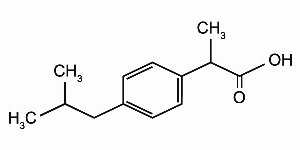 I counted the number of electron domains (steric number)to be 3. I counted the double bond as one and each lone pair as one. It has two lone pairs and one double bond. So this means the electron geometry should be trigonal planar. But I am stuck on molecular geometry. There is no molecular geometry I have found in any chart that has two lone pairs and one bond. Am I making a mistake somewhere? Any help is greatly appreciated!

You are right! There is no molecular geometry in any chart that has two lone pairs and one bond, because the only possible geometry with one neighboring atom is linear. The central atom in a chemical moiety must have at least two neighboring atoms in order to predict the geometry around this central atom (according to VSEPR model). Let's take the case of oxygen atom of the hydroxyl group (in Ibuprofen). The oxygen atom here, as a central atom, has the steric number: 4 ( It has two lone pairs and two simple bonds with carbon and hydrogen atoms). So, The molecular geometry around oxygen atom is bent.

Not the answer you're looking for? Browse other questions tagged organic-chemistry homework hybridization molecular-structure or ask your own question.

7
Shape and polarity of the iodate ion
5
Why is only one lone pair in imidazole delocalised?
9
Steric effects of a lone pair and piperidine
6
How can placing a lone pair in axial position differs from that in equatorial in number of electron domains?
1
How to explain the structure of HNO3 with a Molecular Orbital diagram?
12
Steric hindrance of an unbonded electron pair
0
When finding hybridisation of atoms, why are double bonds and triple bonds only considered once?
5
Do molecules with a hexagonal planar geometry exist?