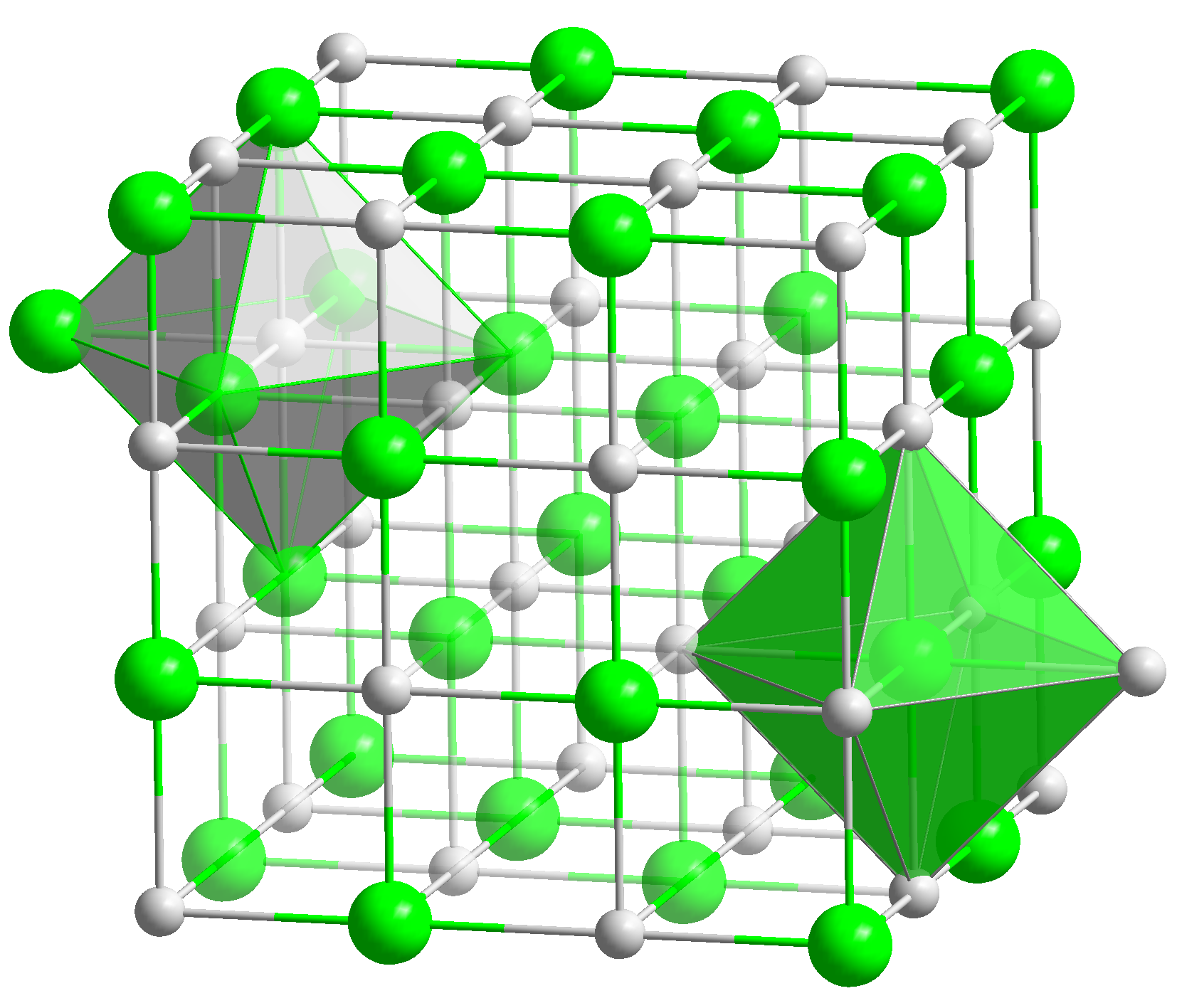 From this diagram of the rock salt structure ($\ce{NaCl}$) we see that both the chloride and sodium ions have the same environment. That is to say, they each have the same number of neighbours at every distance, except that the charges are opposite.

Is there any reason why we can't think of it the other way round, with sodium ions forming the fcc lattice and chloride ions filling octahedral holes?

Is it perhaps because sodium ions are smaller than chloride ions, or something else?

Unit cells are just a way of describing a given crystal. You can certainly draw $\ce{NaCl}$ the other way, with $\ce{Na+}$ in the corners and it's still correct. There are a few ways of thinking about this structure:

They're all equivalent. The figure above actually shows both types of octahedral holes. Some might prefer to visualize the structure as the second case since, as you say, the chloride ions are bigger, but going the other way isn't wrong, nor does it describe anything different.

This is a more important question than one would think and not adequately answered before. Yes, there is an equivalence so you would wonder why we define one as the lattice and the other as in holes. However this is an important idea of solid state chemistry.

The important thing is generally (GENERALLY) anions are bigger than cations. Also more often the same species. In oxides, this is especially the case. So you can think of the anions as a close packed lattice (FCC or HCP) in the sense of balls with closest packing. and the cations in certain holes of the lattice. This is the same in NaCl where chloride is bigger than sodium.

Of course this is chemistry, so everything depends. But if you want a useful initial organizing idea for MANY structures, think of close packed anions with cations in certain holes (perovskite, spinel, corundum, etc.).

So yes, there IS a reason why we think of the chlorides as the base lattice, not the sodium ions and you are right on that the reason is size.

0
In ionic solids such as NaCl, do the cations fill interstital holes in the cation's cubic close pack structure?

4
What are Lattice Points?
4
How to determine the packing geometry of compounds with contradicting coordination number and radius-ratio values?
3
How can ionic substances have an infinitely-repeating lattice structure?
4
How is Persian blue rock salt made?
4
How many tetrahedral and octahedral holes are there in a bcc unit cell?
1
Comparing the Lattice energy of different compounds
2
Unit cell structure of ionic crystal