It is said that atoms cannot be created. If so, then how did atoms get created after the Big Bang? [closed]

Ask Question
Asked 5 years ago
Active 5 years ago
Viewed 976 times
3
$\begingroup$
Closed. This question is off-topic. It is not currently accepting answers.

I read somewhere that atoms cannot be created. If this is true, then how did the atoms form after the Big Bang? Also, does this mean that the number of atoms in our universe has remained the same since then? Also, what happens as the universe expands? Does the atoms just scatter or are new atoms being created?

how did the atoms form after the Big Bang?

The theory of this process in known as Big Bang Nucleosynthesis 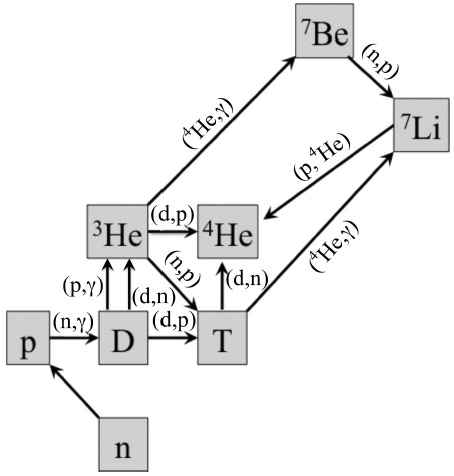 Starting from protons and neutrons, light elements formed. Later, in stars, nuclei up to iron formed through nuclear fusion. Nuclei heavier than iron formed from supernovae by the r-process and asymptotic branch giant stars by the s-process.

Also, does this mean that the number of atoms in our universe has remained the same since then?

No. The number constantly changes due to fusion, fission, supernovae, creation of neutron stars, black holes and possibily quark stars.

Also, what happens as the universe expands? Does the atoms just scatter or are new atoms being created?

Currently, this process does not create or destroy atoms. However, according to the theory of accelerating expansion, there is a senario referred to as the "big rip" in which all atoms would be destroyed.

Not the answer you're looking for? Browse other questions tagged atoms astrochemistry or ask your own question.

3
Where did all the elements come from?

1
Storing kinetic energy in bonds
2
If atoms are mostly empty space then how are we able to interact with things?
5
Why did Dalton assume that atoms are spherical?
13
Biological Consequences of Asteroid Mining—Death by Isotope?
10
What actually is the Wavefunction?
5
Is NaCl crystal always going to have even number of atoms?
1
How did early chemists measure mass of atoms?