A stability model premised on Lewis acid-base covalent bonding can be proposed to rationalize the stability shown by sulfides such as CuS and Ag2S. For instance, although the oxide anion is a stronger Bronsted base than sulfide anion, sulfide anion can be (and usually is) a stronger Lewis base than oxide anion since S has a lower EN than O. Furthermore, recall that Lewis base strength depends on the Lewis acid with which the Lewis base interacts. For the sulfide anion, since sulfide anion possess empty valence 3d orbitals, Lewis acid-base interactions are often very strong if the Lewis acid is a low oxidation state metal ion with a fairly large number of valence d electrons. for such cases, sulfide-to-cation sigma coordinate covalent bond formation couples with pi-type coordinate covalent bond formation because metal ion d-electron density "drifts" back to empty valence 3d orbitals on sulfide anion. This results in covalent bond interactions that have substantial, strong multiple ond character and formation of a metal-sulfide lattice which is rather macromolecular in character. In sum, such as lattice must be very stable ...

1) Is the above excerpt describing pi-backbonding?

2) Is pi-backbonding more favorable for metals in a low rather than a high oxidation state because such metals still have substantial electron density that needs to be stabilized - and preferably stabilized by something more electronegative than a metal?

3) Metal d-orbitals overlap with p or d-orbitals of the non-metal. How does this work? I always see diagrams such as these: 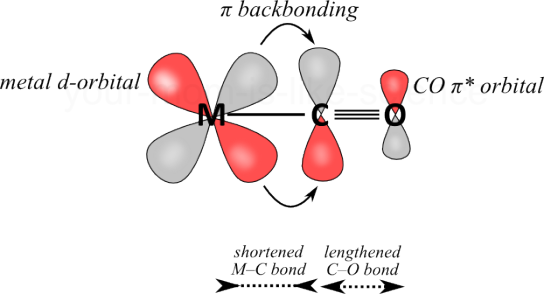 Is the overlap between the metal d-orbital and non-metal p-orbital as poor as depicted? Are the d-orbitals really at a 45 degree angle relative to the p-orbital?

4) How well is the above excerpt written? I feel that two improvements could be made:

A) The passage seems to imply that Bronsted acidity and basicity do not depend on the corresponding base or acid. Wrong implication. HCl in HBr solvent won't be a strong acid.

B) Why electron density might just "drift" to the non-metal could be explained explicitly. I.e. electronegativity.

1) Yes and no ... the d-d orbital overlap will almost certainly have pi-orbital character (angular node along bond axis), and it could reasonably be considered "backbonding" because the electron density is going in the canonically "unexpected" direction (i.e. away from positively charged metal center). On the other hand, chemists (particularly inorganic chemists) usually restrict the phrase "pi-backbonding" to refer to back donation from the d-orbitals of a neutral or ionic metal center into anti-bonding orbitals of a ligand, typically an olefin or a carbonyl ligand.

3) Those diagrams are just intended to capture the qualitative aspects of the bonding interaction, such as the symmetries of the orbitals involved. Remember, the orbitals are 3-dimensional shapes that describe the probability of finding an electron with a particular set of quantum numbers in a given region of space. Depictions like the one in your post are helping to visualize the orbital by assuming a fairly tight "tolerance" for the probability. For example, those images might depict the surfaces that enclose 75% of the total probability density. If you expand that to 90%, or even 99%, the lobes maintain the same basic shapes but get much larger, which might make the overlap seem more significant, but could also be confusing for other reasons.

4) I think it is quite well-written, but I suppose it would depend on the broader context in which it was being presented. I guess it is presented at an inappropriately high level for an introductory chemistry textbook, for example.