Why does the freezing point of a sample gas occur at a certain temperature? [closed]

The graph below shows a cooling curve for a sample of gas that is uniformly cooled from $155~^\circ\mathrm{C}$. 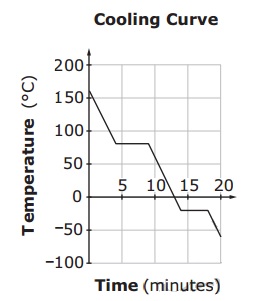 Why does the freezing point of the substance occur at $–20^\circ\mathrm{C}$?

Its really just a simple questioning and I think the answer is 3, because the average kinetic energy is increases when converted from solid to liquid. Any reason why I'm wrong and the answer says it is 2?

The first thing is that it has to be going from liquid to solid because the substance is being cooled. Like tap water put in the freezer: liquid to solid.

On that note, the average kinetic energy goes down (directly assumed because that's what temperature is, and it's going down.)

Which leaves us with two answer choices: latent heat absorbed or latent heat released, where latent heat is the heat of a (thermodynamic system) at a constant temperature (like a phase change!)

If you're gaining energy, particles are going to have more velocity, like those virtual diagrams of gases with fast moving balls. Since we're going to a solid, losing energy makes sense because particles can't move as fast and are trapped in a fixed location (like an ice cube, which has a definite cuboid shape).

So liquid to solid, latent heat because the temperature is constant, and losing energy to become a solid - B is the answer.

5
How much heat is needed to break CO2 down to CO?
6
Super-cooled liquids
6
Latent Heat and Kinetic Energy
0
Why is the plateau on a heating curve in equilibrium?
3
Effect of doubling kinetic energy on phase transitions
0
Latent heat of vaporization/evaporation
2
How does heat transfer between molecules happen in deep?
1
Definition of enthalpy of vaporization