Can there be more solvent in a solute?

Something I know that leads to this question:

It might sounds weird to say water as a solute. Textbooks always says that solvent is the one present in larger quantity. This leads to a contradiction with the saying that water is an universal solvent.

How to identify the solute and the solvent in a solution besides locating the word "aqueous"?

The textbook statement you gave ("solvent is always the one present in larger quantity") is simply a convention that makes it easier for us to talk to each other about mixtures of substances. We have other words for other types of mixtures. For example, in your ethanol-water example, you are correct in stating that it doesn't make much sense to talk about solute and solvent. So, we call these two liquids "miscible". They mix together in all proportions. A good demonstration that captures the essence of different types of mixtures is the phase diagram of phenol-water: 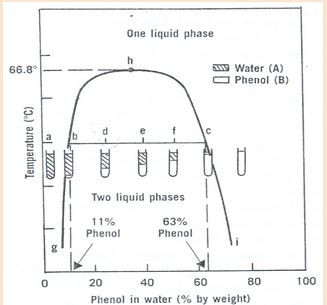 Here we have a feature that is called a "miscibility gap". There is a region, defined by the rainbow shape in the diagram above in which phenol and water separate into two distinct phases. If we had pure water and added just a little bit of phenol to it at room temperature, we would find that it would dissolve into the water up to about 7 or 8 wt%. So, phenol would be the solute and water the solvent. Adding more than this amount pushes the mixture into the miscibility gap so that now the phenol and water would mostly separate into two separate phases. Let's say we add enough phenol to get us to 40 wt%. If we heat the two phase mixture up to 67 C then it will suddenly become miscible. Now only one phase exists and we can add as much phenol as we want to it without having to worry about two phases forming again. There is no solute or solvent here. Just a mixture of two liquids that exist in a single phase.

I think you may be emphasizing the term "universal solvent" a bit too hard. Water is "universal" as a solvent simply because lots of molecules are at least somewhat polar and so dissolve in polar water. But otherwise I'd say your textbook is right: the solvent is generally in greater quantity than the solute by convention.

I think you may be putting too much significance on the semantics of some mnemonics that are perhaps phrased more absolutely than they are intended to be used. That is particularly true with the phrase that "water is the universal solvent", which is not really a scientifically significant statement at all. Certainly gasoline, or mineral oil, will not dissolve in water, even in very small quantities, so why would it be considered "universal" in the sense you seem to be taking it?

Not the answer you're looking for? Browse other questions tagged aqueous-solution solutions or ask your own question.

21
A drop of water in a tin of sugar: Which one's the solvent, the sugar or the water?
-1
The Definition of a Solution
0
What if solute and solvent exist in equal quantities?

17
What causes the lowering of vapour pressure in volatile/nonvolatile solvent mixtures?
4
Does the boiling point of an aqueous solution depend on what the solute is?
0
Boiling point elevation for a mixture of ethanol and water
21
A drop of water in a tin of sugar: Which one's the solvent, the sugar or the water?
0
What is to be called as solvent?
9
Limitations of Henry's law